The Masters: What's in Bryson DeChambeau's bag at Augusta National?

Take a look at what clubs Bryson DeChambeau is using as he hunts down his second major title at The Masters. 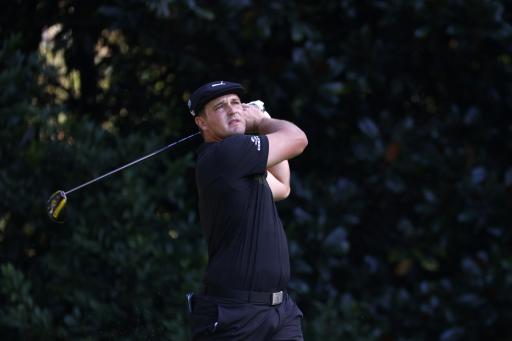 Bryson DeChambeau looked a little out of sorts off the tee on Thursday during his opening round at The Masters, but the reigning US Open champion still managed to shoot a 2-under par score of 70 to stay in contention.

Golf fans around the world were eager to watch 27-year-old attempt to overpower Augusta National, but he lacked his usual accuracy with his Cobra SPEEDZONE driver.

RELATED: Bryson DeChambeau struggles off the tee but remains in Masters contention

"I'm very happy with the patience I delivered to the course today," said DeChambeau following his opening round. "I started off strong with a five footer and I misread it a little bit, and I just pulled my drive on 11 and went too far and made a great par save.

"Had an opportunity on 12, lipped it out. And then 13 I just didn't draw it around the corner enough, and I got greedy. This golf course, as much as I'm trying to attack it, it can bite back. It's still Augusta National, and it's the Masters. It's an amazing test of golf no matter what way you play it.

"I tried to take on some risk today. It didn't work out as well as I thought it would have, but at the end of the day I'm proud of myself the way I handled myself and finished off. Birdieing eight and nine was a testament to my focus level, and wanting to contend here."

RELATED: Patrick Reed hits SHOT OF THE DAY on day one at The Masters

DeChambeau opted not to use his new 48-inch driver for the opening round, but we could still see the club make its debut at some point this week. Check out DeChambeau's full set-up below.

Bryson DeChambeau - What's in the bag at The Masters

NEXT PAGE: The Masters: What's in Jon Rahm's bag at Augusta National