Instagram star Paige Spiranac did not enjoy watching Bryson DeChambeau complete a speed training session on the driving range ahead of The Masters. 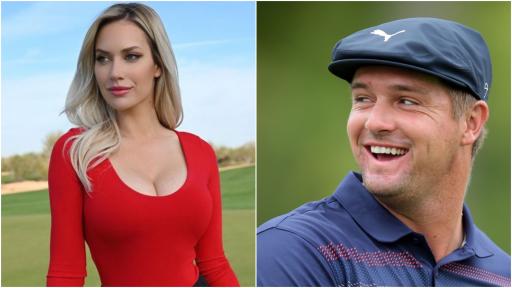 Paige Spiranac called for Golf Channel to show less Bryson DeChambeau clips and more highlights of the 2019 Masters, when Tiger Woods completed one of the greatest comebacks in the history of the sport.

It's safe to say that Spiranac isn't DeChambeau's biggest fan, but the Instagram star has made it clear she thinks the reigning US Open champion is extremely talented.

That being said, Spiranac has labelled DeChambeau "annoying" in the past and she previously slammed the big-hitting PGA Tour star for discussing Tiger Woods during his victory speech at the Arnold Palmer Invitational.

With The Masters just days away, there is plenty of coverage currently being shown both in the United States and in the UK, as golf fans prepare to be glued to their seats for four days straight.

Golf Channel were showing clips of DeChambeau working on his speed on the driving range, while a rather intrigued Vijay Singh watched closely with a smile on his face.

Less of this and more replaying the 2019 Masters pic.twitter.com/p4MXkcuo30

"Less of this and more replaying of the 2019 Masters," said the 28-year-old, who has amassed over 3 million followers on Instagram.

One golf fan seemed to be in agreement with Spiranac, saying: "Disgusting swing, painful to watch, not the direction golf should be going! Golf should be a sport where technique and ball handling are combined with physical and mental fitness, not about brutal power to hit a ball as far as you can combined with equipment innovation."

Another fan defended DeChambeau and praised him for what he is doing with his body and swing: "Can’t hate on him. He’s really trying to make golf truly athletic. I just wonder how sustainable it is."

NEXT PAGE: The Masters Betting Tips: Best Bets and Each Way Picks at Augusta National