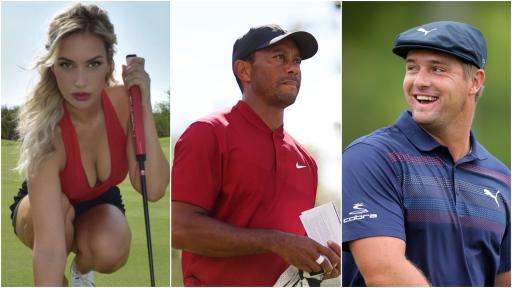 Paige Spiranac was unhappy that Bryson DeChambeau used his victory speech at Bay Hill as an opportunity to name drop Tiger Woods, whilst he recovers from a near fatal car crash.

DeChambeau won the Arnold Palmer Invitational after an exciting final round that saw him go head-to-head with veteran and former World No.1 Lee Westwood, with the American beating the Englishman by a single stroke.

It was a tournament that DeChambeau has always dreamed of winning, with Arnold Palmer being one of his inspirations in the sport and after claiming the trophy and the famous red cardigan, DeChambeau spoke about another player who he looks up to.

PGA Tour: How much did each player win at the AT&T Byron Nelson?
Jordan Spieth: "My rehearsal is not exactly what I'm trying to do"

"It's been quite a battle. I don't even know what to say, to win at Mr Palmer's event, it's going to make me cry," said an emotional DeChambeau.

"It means the world to me. I got a text from Tiger [Woods] this morning and he obviously had done really well here. We talked about just keep fighting no matter what happens and play boldly like Mr Palmer said.

DeChambeau victory speech had already caused a stir on social media after he reeled off a list of sponsors he wanted to thank before saying anything, but his words on Woods was what didn't sit well with Spiranac.

Spiranac then posted more tweets about DeChambeau, firstly saying that she can respect the 27-year-old but still find him "annoying" and then in response to a golf fan who was defending DeChambeau, Spiranac replied saying that she finds him "disingenuous" at times.

I can respect Bryson and still find him annoying

He just comes off disingenuous at times.