"She was the most popular girl on Masters weekend"

Lady lets man watch The Masters while being out on the town at the weekend. 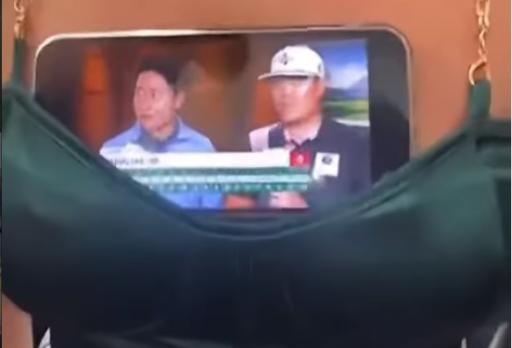 A video went viral over Masters weekend of a lady placing a phone on her chest so that a man could watch The Masters while being out on the town with friends at the weekend.

It's fair to say the lady wanted to end up on Barstool Sports, at least judging by her comments, but the video was eventually picked up by Old Row on Instagram.

The Golfballed Instagram account also picked it up, with the caption: "She was the most popular girl on Masters weekend."

Scottie Scheffler ended up winning The Masters for his maiden major title.

It marks a fourth victory in the last six weeks for the new World No.1.

Scheffler becomes the first player since Arnold Palmer in 1960 to earn his fourth win of the season at The Masters.

Rory McIlroy finished in solo second after finishing with the lowest final round in Masters history of 64.

McIlroy ended up three shots behind Scheffler, capping things off in style with a holed-out bunker shot for birdie, which brought the house down.

Tiger Woods finished with a disappointing 78 but he took the positives from the week in the sense he was able to walk 72 holes on one of the toughest walks in golf at Augusta National.

Woods finished up solo 47th at The Masters on 13-over par.

In his post-tournament interview with Sky Sports Golf, however, the 15-time major champion confirmed he would be teeing it up at the 150th Open Championship at St Andrews this summer.

Woods would not clarify as to whether or not he would tee it up at the other majors, but he did say that wants to play in as many of the biggest tournaments as possible on the PGA Tour.

Next Page: Cameron Smith reacts to his implosion on the 12th hole at The Masters