Cameron Smith spoke to the media after seeing his Masters dream slip away with a horrid triple bogey at the famous par-3. 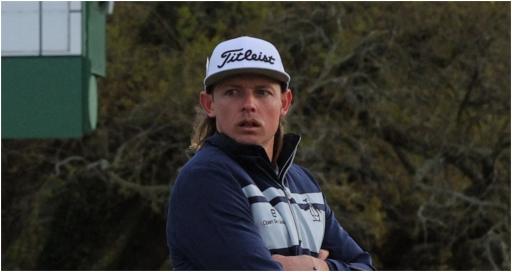 Cameron Smith can join the list of elite players who came unstuck at The Masters on Augusta's famed par-3 12th.

Australian Smith had started like a freight train when he slashed Scottie Scheffler's lead by two strokes after opening with two birdies.

Both Scheffler and Smith played the par-4 third hole in similar fashion with loose tee shots, but the American got an unbelievable break.

Scheffler, 25, was given relief from an interfering scoreboard and it left both players in a similar position facing tough up and downs.

Smith watched on as Scheffler chipped in but he failed to save par before making the turn at 1-under. Smith made bogey at the fourth, too.

But he picked one shot up at seven to give him some positive vibes going into the back nine. That's where the tournament really starts.

It looked like there might have been a real momentum shift when Smith made an epic birdie on the brutal, 520-yard par-4 11th.

Yet by the time Smith walked off the green on 12 he had - like many before him - completely shot himself in the foot.

His tee shot was absolutely dreadful and found the water. And Smith, 28, knew it. "Yeah. Yeah, it was a terrible swing," he told the media.

Smith added: "Just a really bad swing at the wrong time. It was actually a really good number. It was a really nice 9-iron. Wasn't even trying to go near that pin, and, yeah, just a really poor swing."

At The Players Championship earlier this year Smith told the world he pushed his tee shot at the island green on 17. But it stayed dry. This shot wasn't. It is a game of fine margins. He walked away a winner, at Augusta he simply had to give it up for Scheffler.

Smith's next swing wasn't much better. His wedge approach over Rae's Creek went straight over the back of the green.

He bumped an iron just past the pin and missed the putt for a double bogey. Pain. Golf is hard. Major golf is harder.

"Yeah, yeah, that green was one of the new greens out here, and those greens just played a little bit firmer, so it's just a really tough wedge shot, and I knew I had to get it down there," Smith said.

He added: "I feel like I've played some of my best golf around here. It's quite frustrating, I guess, to not walk away with a win yet, but at the same token, I look forward to the challenge of coming back here next year and trying to do it again."

Before he left his press conference, he said: "I love this place. I'll be back here next year and trying to put up another one."