Did you know about this golf rule Scottie Scheffler took advantage of? 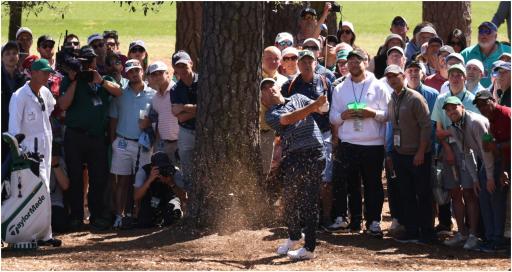 Scottie Scheffler had moments of pure brilliance and fortune on his way to becoming the Masters champion but he also made clever use of the rules.

It was during his third round at the 18th hole when things got spicy for Scheffler, as he carved his tee shot straight into the trees.

His fate could have been far worse and his score much higher had he not found his golf ball.

Scheffler told the media of the moment where he was filled with panic: "Obviously, I didn't hit a good tee shot.

"And after that, I didn't think … I didn't hear anything loud. Teddy was like, 'I saw it clip a branch.'

"We're, like, no big deal, just be over there on the left and chip out, whatever.

"And then we saw the guy with the flag that always finds the balls kind of panicking. I was like, 'oh, crap, wonder what's going on here?'

"Fortunately, they found the ball. And then all I was trying to do was figure out how I was going to get it on the green for my third shot.

"And fortunately, I was able to take an unplayable out of the bush and still have a swing."

Scheffler did say that he half thought about playing his ball out of the trees.

But then he decided to use the Rules of Golf to his advantage.

Scheffler was flanked by a rules official from the DP World Tour, Kevin Feeney, when all of this unfolded.

The 25-year-old marked his golf ball so he could actually confirm it was his. He was not allowed to clean it.

Scheffler determined it was his ball.

Then he measured out two club-lengths to the right of his ball with the driver to determine the best chance of still reaching the green.

Then there came a bit of confusion about whether or not he was allowed to move some of the pine needles before he dropped the ball.

But under the Rules of Golf, specifically 15.1/a3, it states that when a ball is to be dropped or placed, the ball is "not being put back in a specific spot and therefore removing loose impediments before dropping or placing a ball is allowed."

A pine needle is a loose impediment.

Scheffler was also allowed to check the ground to see if there was any roots in the drop area.

He dropped his ball, but it rolled out of the two clublengths area. He dropped it again and the same happened. Then he placed the ball.

Scheffler was 237 yards away and he found the green but it rolled off the back edge. From that spot, which had wreaked havoc earlier in the day, he got up and down.

He putted his ball up the slope and kept it on the dance floor before making an incredible five. Other competitors, such as Tiger Woods, had elected to chip from there and paid the price.

Sometimes it just pays to know the rules.