Tiger Woods is GOING TO PLAY in The Masters and he believes he can WIN IT!

Tiger Woods will compete at The Masters as long as everything goes smoothly on Wednesday. 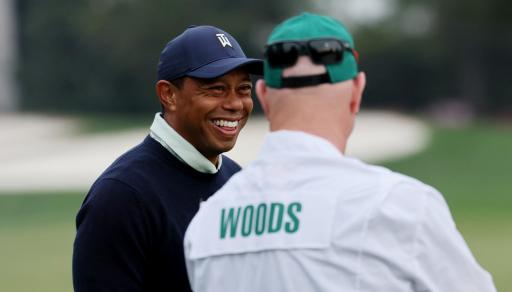 Tiger Woods has confirmed to the media that he will return to competitive golf at The Masters on Thursday, providing everything goes smoothly in his practice round on Wednesday.

"As of right now, I feel like I'm going to play in The Masters," Woods told the media in his Tuesday press conference at The Masters.

"I'm going to play nine more holes tomorrow. My recovery has been good, that has been the challenge.

"That's why I came to test it out for 27 holes... we also played the par-3 course as Charlie (son) couldn't help himself.

"Another day of nine more holes and then comes game time."

Woods was then asked whether or not he thinks he can win The Masters this week, a victory that would pull him level with Jack Nicklaus on six wins, and his answer was clear for all to see.

"I do," responded Woods.

"I can hit it just fine. I don't have any qualms about what I can do physically from a golf standpoint.

"It's now walking that is the hard part. It's normally not an easy walk to begin with, now given the conditions my leg is in it makes it more difficult. 72 holes is long and a tough challenge, but it's a challenge I'm up for."

Tiger Woods: "As of right now, I feel like I'm going to play The Masters." pic.twitter.com/KhAb8jtuXZ

Woods made a trip to Augusta National last week to play a practice round with his son Charlie Woods and Justin Thomas, and he then headed back home to Jupiter, Florida to decide on whether to compete in The Masters.

After much speculation as to what may or may not happen for Woods at The Masters this week, the 15-time major champion who memorably won his fifth Green Jacket in 2019 has now declared his intentions to tee it up in the first round on Thursday.

Woods, who came close to death in a car crash in Los Angeles some 13 months ago, will make his first competitive start on Tour since finishing tied 38th in this very event back in November 2020 won by Dustin Johnson.

"I've worked hard, my team has been unbelievable," said Woods.

"I've been lucky to have great surgeons, PTs and physios. We have worked to get to this point, an opportunity to walk the grounds, test it out and see if I can do this.

"It's been a tough, tough year with a lot of stuff I've had to deal with. I don't wish that on anyone.

"It's Masters week and I am here to play and practice and be able to say thank you to all the guys that have texted me and called me as it's meant a lot."

Woods admits he is still experiencing a lot of pain with his back and right leg, though.

"Yeah there is a lot of pain each and every day," said Woods, who has had multiple back surgeries in recent years, along with nearly losing his leg in his horror car crash in February 2021.

"I've had to endure pain before and this is different obviously, with what has transpired to my leg. We've had to put a lot of work in, I am thankful to everyone that has helped me and given me the opportunity to play golf."

Woods will play alongside Louis Oosthuizen and Joaquin Niemann for the first two rounds at The Masters.

As for what would mark a successful week for Woods, he said: "I think the fact I got myself here to this point is a success and now that I am playing, now everything is focused on how do I get myself into contention on the back nine Sunday."

Fred Couples, who won The Masters in 1992, believes Woods is right to suggest he can win a sixth Green Jacket this week, especially after what he has seen in practice so far this week.

"If he can walk 72 holes around here, he'll contend," said Couples.

"The driver was a machine. I watched it today, he looked phenomenal."

Next Page: Exploding the myths of The Masters to help you pick this week's winner