The Masters: Collin Morikawa on Bryson's video & his new approach to Augusta

Collin Morikawa discussed Bryson DeChambeau's video with Dude Perfect, his own form at The Masters and how he is changing his game plan. 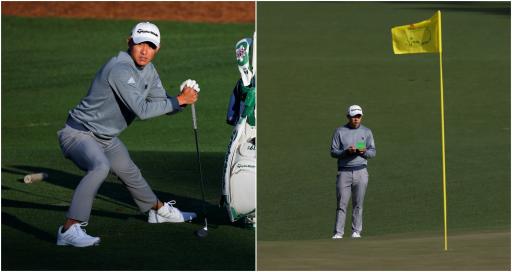 Collin Morikawa says he "still walks on his toes" around Augusta National so he doesn't break any rules as he revealed his thoughts about Bryson DeChambeau's YouTube video with Dude Perfect.

Related: What Hideki Matsuyama chose for the Masters dinner

Morikawa is playing in his third Masters this week. In 2020 he finished in a tie for 44th after shooting four rounds in the 70s.

A year later he finished in a tie for 18th. Morikawa admitted that in his first two Masters he was too concerned with "mud balls" and umcomfortable thoughts.

In his press conference on Monday afternoon, the World No.3 admitted that in his Masters career so far he has been too concerned with how to play the course.

Instead, he should have been focussing on how not to play it. Where he can miss, where he can't. Before, he thought he needed to draw the ball more.

He hit a draw in his college days before he fine-tuned that beautiful cut.

This year, that is not the case. "I need to play my game. You hear how much you need to hit draws, and you have to hit it high and you have to do certain things," he said.

"But that's what I did wrong the past two years. Pretty much my week prep two years ago and last year was, 'How do I hit a draw? How do I hit a high draw. How do I do this?'

"This year was a little different. This year, I just made sure everything was finely tuned and I go out there and figure out how to play the course to my strengths. And that's the biggest thing that I've learned, I think, overall."

Of course, the major talking point this week is Tiger Woods as he made his return to Augusta National.

At the time of writing, Woods had not committed to playing. What was Morikawa's earliest Masters memory?

He said: "Probably watching Tiger's '97 win. For me, I would say that's my first actual memory.

"I think going back, the most memorable, like everything I remember, where I was, everything, was probably 2019 when Tiger won.

"I was in college. We were sitting all together, we were watching it. I mean, that Sunday was booked out to do nothing other than watch TV.

"And that's like really special because normally I'll watch with the parents, be home on a Sunday, and you watch the late half of the back nine, even a little bit parts of the beginning, but you just have it on.

"I'm not really zoned in on focusing on every shot, but 2019 was where we were all just glued to the couch and glued to the TV."

Morikawa was also asked about the history of The Masters. He confessed that his knowledge of golf history in general is lacking.

Morikawa said: "I'll say it again, [the] history of golf kind of goes in one ear, comes out the other, goes in the eyes, exits somewhere.

"I saw him [O'Meara] last week and I talked to him a bunch, and he's been a great friend and someone I can just talk to about golf. And I was like, 'What putt?' I had no clue which putt he had to win the Masters.

"So he drops the ball, and he's like, 'Oh, I thought you would have known.'

In his press conference, DeChambeau even admitted he was surprised that Augusta gave them the go ahead to film.

What did Morikawa think?

"Yeah, I did not watch the video. I saw the announcement on that," he said.

"But it does, right? I don't know how the video turned out but I'm sure it has plenty and plenty of views because they have a different audience of kids, and the teams watching them that play a bunch of sports.

"So as it relates to how buttoned up Augusta is, I mean, you know, I still walk on my toes around here and make sure I'm not breaking any rules.