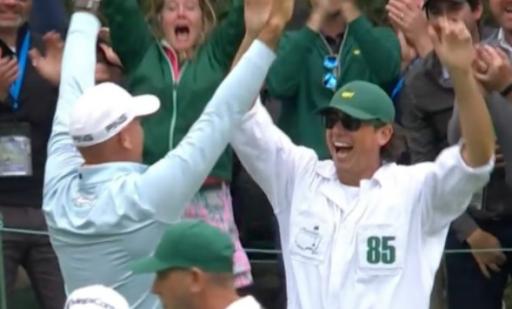 Stewart Cink recorded the 24th ace on the famous par-3 16th hole at Augusta National on day two of The Masters.

Cink, who has his son Reagan on the bag these days, sent a beautiful short iron to the right side of the green and he used the slope to perfection as the ball rolled all the way down and into the bottom of the cup.

It marked the sixth hole-in-one of Cink's lengthy PGA Tour career and that now ties him for eighth most aces in PGA Tour history (since hole-by-hole data became available in 1983).

The hole-in-one was extra special for the Cink family as it was also Reagan's birthday today.

Stewart Cink hits an ace at the 16th hole in Augusta! pic.twitter.com/sWXcDpgR7T

He would go on to sign for a round of 75 and he would miss the cut on 7-over par.

The 48-year-old American has won eight times on the PGA Tour since joining the circuit in 1997.

Cink won the 2021 RBC Heritage for the third time in his career, with it becoming the fourth player to win twice in the same PGA Tour season after turning 47. The others were Sam Snead, Julius Boros and Kenny Perry.

He has endured something of a mixed bag of results so far this year on the PGA Tour but he did pick up an improved tie for seventh at the Valspar Championship to bump him up to 73rd in the world rankings.

Now Watch: Hudson Swafford's clubhead flies off at impact at The Masters