Rory McIlroy spoke about why he will never resent Augusta National as he spoke about dad life during the majors. 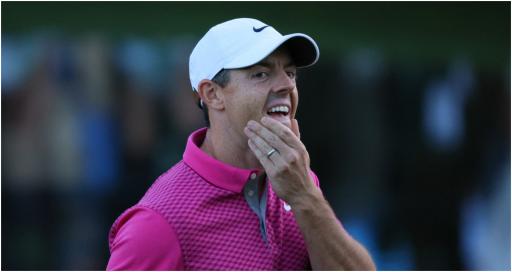 Rory McIlroy says even fatherhood can't stop him from thinking about a bad swing at The Masters.

Related: Rory McIlroy makes equipment change ahead of The Masters

A mildly content McIlroy, 32, found himself at 2-over par after 36 holes at Augusta National as the wind gradually picked up on Friday.

The Northern Irishman admitted he felt like there was little point in practising in the evening because of the gusty conditions.

So instead he was content to make his way back to his hotel room and relax with wife Erica and daughter Poppy.

"We'll have a splash around in the bath a bit," McIlroy told Sky Sports. But even fatherhood won't distract him from thinking about one moment of pain.

McIlroy made a pretty horrid double bogey at the 11th hole. He had found the fairway with his tee shot and chose a 6-iron for his approach.

But his pass at the ball was not a pretty sight. He had to yell fore as the ball headed way, way, right towards the patrons.

McIlroy was asked if he was able to put a moment like that behind him considering he is a father now and he has a different perspective about life in general.

At 2-over par for the tournament, McIlroy was safely inside the projected cut of 5-over par.

McIlroy added: "You go out tomorrow and you play a decent front nine, and all of a sudden you're right in the thick of things.

"I'm in a decent position. I'd like to be a couple of shots better at least, but I'm still right there."

McIlroy has for so many years come away from Augusta National empty handed. This is his 14th Masters.

Has he come to resent the place?

"Sometimes I hate the results of the tournament, but in terms of the place and the club and the membership, it's wonderful, and I always have a great time here."