The Masters: Jordan Spieth experiences another nightmare on 12 at Augusta

Jordan Spieth experienced déjà vu at the famed par-3 12th hole at Augusta National en route to missing the cut at The Masters. 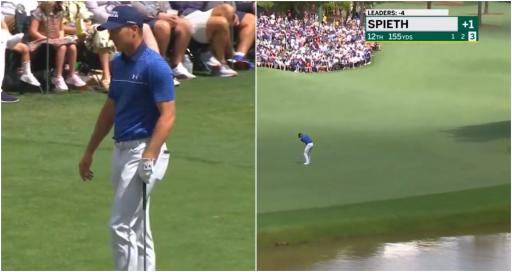 Jordan Spieth had a confession ahead of the 86th Masters at Augusta National.

More: Watch Hudson Swafford's clubhead fly off during shot at The Masters

That confession was the moment that all but gave the green jacket to England's Danny Willett in 2016 didn't bother him anymore.

Back then he recorded a catastrophic quadruple bogey that was sickening to watch. It was sickening, too, for Spieth to experience.

Well, Spieth is known for his brutal honesty about his game so who are we to question the fact it doesn't come into his thinking these days.

Spieth, 28, entered the first major of the year in another stretch of poor form. This time, his trusty putter was just not co-operating.

Yet during Friday's second round history unfortunately repeated itself on Spieth. This was also another difficult watch.

And it was the famed par-3 12th hole again that Spieth experience déjà vu. His first tee shot? Water. His third? Also wet.

By the time he trudged off the green a horrid six was recorded on the score card. Sometimes it just isn't your day.

Jordan Spieth into the water twice. The 12th hole continues to haunt him at Augusta National.pic.twitter.com/dtGBptlErH

Oh Jordan. This was all the more painful considering he was grinding hard at 1-under for the day in windy conditions.

Spieth reflected on that 2016 moment earlier in the week by saying: "I don't think -- since I've won, I don't feel any damage from it at this point [about it].

"Ideally, I get in that situation again, and it makes me play the right shot, and I win the golf tournament because of it.

"I think in 2018 is where I really just kind of got back on track. I made birdie on the hole on Sunday to get to maybe 6-under or something through 12 and ended up getting to 9 through 16, and it was just kind of that like moment where I was like, all right, I got this hole back. So I don't think a whole lot of it.

"If I hadn't won the tournament, I think that it would mean more, but it was simply a mistake on -- I mean, I hit the ball terrible that week.

"So it wasn't really that big of -- I mean, it was a surprise that I chunked a wedge shot or whatever, but I wasn't -- I mean, I was hit and missing everything short right. That's really the only hole -- there and 13, you can't really miss short right.

"So I feel pretty good. It doesn't even come into my head anymore."

Spieth would go on to double-bogey the par-4 18th for a round of 76 and it meant he would miss the cut on 6-over par.