WATCH: Was Phil Mickelson taking CBD oil at The Masters? 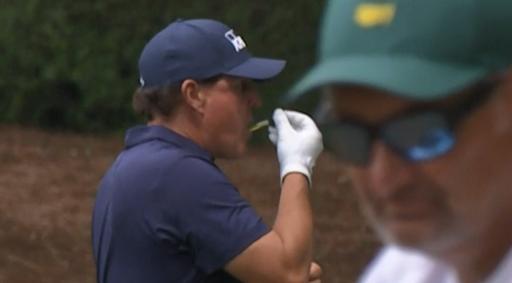 Phil Mickelson was spotted using what appeared to be CBD oil at The Masters, according to a number of golf fans and CBD experts on social media.

Judging by the video posted by fans on social media, Mickelson, 49, used a pipette to drop an unidentified liquid in his mouth while on the par-4 11th hole at Augusta National where he went on to finish tied 18th.

CBD - short for Cannabidiol- is a liquid extracted from the flowers and buds of marijuana, which has become legal for medical or recreational purposes.

The benefits of CBD oil - according to promoters of it - are that it helps with anxiety, pain and other health problems.

WATCH THE INCIDENT BELOW...

As many as 30 states have legalized CBD oil as a result of legalising some form of marijuana possession or use, while another 17 states have specific laws around CBD oil.

However, CBD oil is not regulated by the federal government, which still considers marijuana a controlled and illegal substance despite states' actions.

Under the PGA Tour Anti-Doping Program, CBD oil is not considered a performance-enhancing drug or substance.

The World Anti-Doping Agency, which the PGA Tour models its program, removed CBD oil from its banned list of substances in September 2017.

There is also some speculation among golf fans that Tiger Woods was chewing CBD gum en route to winning The Masters.

Of being spotted chewing gum, Woods said: "Well, I'm chomping on this gum because I usually get hungry, I keep eating so much and it curbs my appetite a little bit, which is nice."

It's not just Phil and Tiger who have been spotted using CBD on the golf course. Bubba Watson is another to add to the list.

There are huge number of players taking advantage of what some are describing as "golf's magic potion", and we will no doubt see and hear of more over the coming months given its newfound popularity on the circuit.

Have you ever used CBD oil, or anything similar? Let us know what you make of the hype on social media.