Why was Tiger Woods wearing FootJoy golf shoes at Augusta instead of Nike? 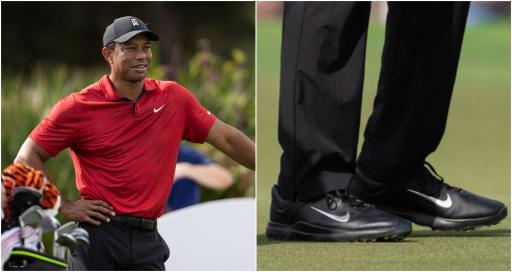 When Tiger Woods arrived at Augusta for a practice round before making his "game-time decision" over whether to play The Masters there was one striking thing apparent.

That striking thing was the fact that 15-time major champion Woods was spotted wearing a pair of black FootJoy Premiere Series Packards as he clipped away a few wedges before smashing his TaylorMade Stealth driver.

Now that might not seem like a big deal at all. Except it kinda is. Woods, as you may know, is a loyal Nike staffer. Has been for decades.

Ever since his "hello world" press conference after turning pro in 1996, Woods has been wearing Nike.

Woods' first deal he signed with Nike 26 years ago was reportedly worth around $40million.

So for him to return to Augusta National on the verge of his biggest comeback ever wearing FootJoy was a little surprising.

Nike released a statement to ESPN's Michael Collins, saying: "Like golf fans around the world, we are delighted to see Tiger back on the course.

"He is an incredible athlete, and it is phenomenal to see him returning to the game at this level.

"His story continues to transcend sport and inspire us all. As he continues his return, we will work with him to meet his new needs."

Foot joys on his feet - take a zoom pic.twitter.com/EBBkGm5web

The speculation was that Woods' Nike pods weren't meeting a comfort need due to injuries he sustained in his car crash.

FootJoy did release a statement but it appears to have been hastily deleted.

Woods has also gone outside the equipment norm in a few other areas over the years.

The grip used on his famed Scotty Cameron putter is not from Cameron. It's from Ping because he prefers their rubber grip. He just blocks out the Ping logo.

Woods also departed from his Nike driver in 2003 at the Deutsche Bank SAP Open in Germany.

It was off the back of Phil Mickelson's comment that Woods was playing with "inferior equipment".

At the time, Woods decided to use a TaylorMade R510 driver during the final round. He eventually switched back to his Nike driver.

Elsewhere, Woods let the cat out of the bag with one of the worst kept secrets in golf. Bridgestone made his Nike golf balls for a number of years.

He currently plays the Tour B XS from Bridgestone.

Nike came out of the hardware market in 2016 but chose to remain in the apparel sector.

Brooks Koepka and Rory McIlroy - along with Woods - remain on their roster.