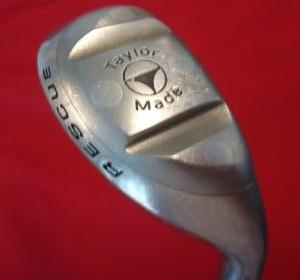 Three months ago, we informed you Phil Mickelson was using a nine-year-old Titleist 980F en route to finishing in a tie for second at the BMW Championship.

We also know that Tiger Woods continues to swipe a headcover off a six-year-old Nike wood and Brandt Snedeker claimed the 2012 FedEx Cup in September with a discontinued TaylorMade SuperFast TP driver in the bag.

Only these historic gems compare little to what diminutive Australian Steve Allan revealed during his six-day marathon at the PGA Tour Q-School Final two weeks ago.

Despite missing out on a card for 2013, the 39-year-old was armed with a trusty old TaylorMade Firesole Rescue Hybrid with Bubble shaft - now worth around £20 - that was first introduced to the game some 14 years ago.

The club holds a special place in my heart since it was the first wood I clasped hands on when taking up the game in 2000.

Though unlike Allan, my version still has its paint intact and is happily spending its retirement in the corner of my garage.

Do have any ‘old faithfuls’ still in your bag? Tell us about it in the forum below, on our Facebook page and on Twitter via @Golfmagic. And remember, you can win some fantastic prizes in return for reviewing your own equipment.