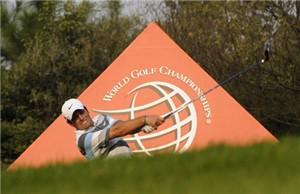 Though he admits he's not even in the top 140 longest drivers on the European Tour, Francesco Molinari, the Italian who won the WGC-HSBC Champions event in Shanghai at the weekend, scores high marks for his accuracy and consistency wth the big stick.

He was an impressive gun-to-tape winner by one shot over new World No.1 Lee Westwood and much of that was down to hitting the fairways with his Nike VR STR8 Fit driver and hitting the greens regularly to set up his 19-under par victory.

Only a four players led by John Bickerton head him in fairways hit off the tee (72.1 per-cent) and despite his lack of length Molinari is still 10th in greens in regulation, despite giving up nearly an average of 30 yards to third-placed Nicholas Colsaerts, currently also the longest driver in Europe (307 yards).

Molinari's win moved  him up 16 places to No.14 in the world rankings on his 28th birthday and kept him three places above his elder brother Edoardo.

“At the beginning of the season, after I had a good season last year, the goal was to get in the top 20 for the end of the year. It was a tough goal, but I have done it now.

“And I'm just really happy as I put a lot of work in the last few years to improve my game with Denis Pugh, and with my coach in Italy, Sergio. I also just started working with Mark Roe on my short game, and I think you can already see the improvements in that.

“So I'm just really looking forward to what's coming, because I showed today and all this week how I can play golf, ” said Molinari who has switched from a belly putter to a centre-shafted TaylorMade Ross Ghost Monte Carlo putter disguised under and Odyssey headcover.