In the Bag: Henrik Stenson 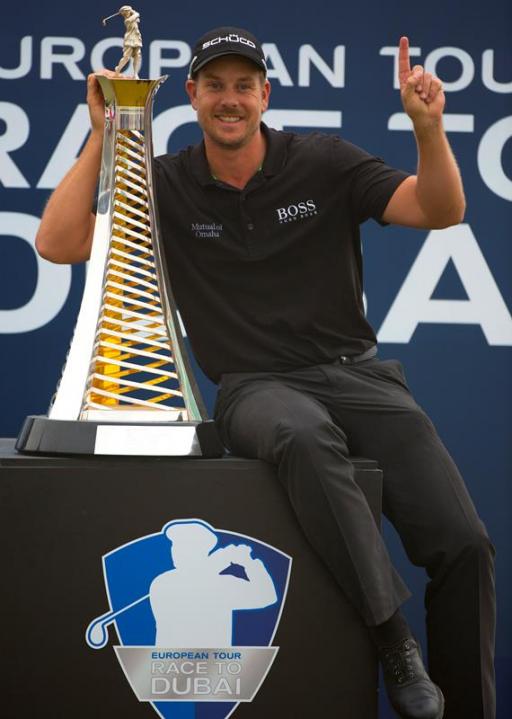 HENRIK STENSON ended his 2013 season in style yesterday by winning the season-long European Tour Race to Dubai following a commanding six-shot victory over Ian Poulter at the DP World Tour Championship in Dubai.

The 37-year-old Swede had already wrapped up the 2013 FedEx Cup on the PGA Tour and he clinched the double after carding a flawless closing 64 to finish the event on a tournament record 24-under, capping things off in style with a sensational tap-in eagle at the par-5 last.

Stenson, who becomes the first player in history to win the Race to Dubai and FedEx Cup, hailed 2013 as a 'dream season'.

"It has been an incredible summer for me, the (autumn) in America was great and now this," said Stenson, who was also second in the Open and third in the PGA Championship.

"It has been a dream season.

"I played so well this week. I knew the guys would try to catch me, especially Ian who never gives up. I wanted to stay ahead of him and I managed to do that.

"I don't know how I am going to be able to top this next year but I am going to give my best in the Majors and that (becoming the first male Swedish player to win one) would be the icing on the cake."

Poulter, who was one of the first to congratulate Stenson after waving a white towel in surrender on the 18th, said: "I have to take my hat off to him, unbelievable. I tried to run him down as hard as I could but even with a sore wrist he has pressed on and I just could not get close enough.

"Henrik has not made a mistake all week and I just had to make sure of second place and some valuable Ryder Cup points. I have thrown a lot at him and given him so much stick, but he is the best player on the planet right now."

Stenson won his first European Tour title in 2001 but then went through the first of two career slumps, the second coming in 2011 and leaving him 230th in the Official World Golf Ranking at the start of last year.

But following three victories in the space of three months, on top of stellar performances at the Open, WGC-Bridgestone and PGA Championship, the newly-promoted World No.3 has now got one eye on the Tiger.

"It's going to take a lot more good golf but I am certainly going to keep on trying," added Stenson, on whether he can become the World No.1.

"Everyone who has won The Race to Dubai has been World No.1 at some point (Westwood, Martin Kaymer, Donald and McIlroy) so it would not be fair not to try."

The Swede first switched into the TaylorMade SLDR driver at East Lake where he won the Tour Championship. On the range that week, TaylorMade Tour reps built Stenson a 10.5-degree SLDR and as expected, Stenson was able to knock off 400 RPMs of spin and averaged ten yards longer on the launch monitor.

The more distance with a higher-lofted club is possible because of the SLDR’s low and forward centre of gravity.

The story was little different at the weekend for Stenson who ranked first in driving accuracy on 89.3% of fairways hit and seventh in driving distance on 300.4 yards.

Stenson's win at the weekend reprsented the eighth worldwide win for the new SLDR driver.

He also ranked first in greens in regulation for the week with his Callaway Black Legacy irons, finding a staggering 94.4% of the greens.

Andy Roberts
Henrik Stenson
Race to Dubai
in the bag
equipment
Previous
Care of the Course - Preventing Unnecessary Damage
Next
In the Bag: Harris English