Kaymer in the Buff! 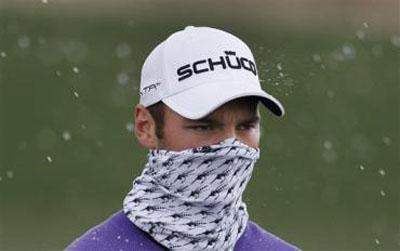 Martin Kaymer caused a stir in Tucson over the weekend with the patterned warmer around his neck. For many it was their first exposure to this multi-functional wonder-garment known as Buff head and neckwear - though one or two nambi-pambi footballers at Man City have been seen to wear something similar!

The German, not prepared for the chillier-than-expected WGC Accenture Match Play championship conditions in Arizona, did what many in the angling, cycling, motorcycle, outdoors, and snowsports' worlds do daily and pulled on his Buff.

"We were ecstatic to see Martin wearing our garment," said Buff, Inc. vice president and  Shirley Choi-Brunetti. "Athletes in many sports and activities rely on our headwear to keep them protected from the elements and a Buff makes the perfect accessory for sun, wind, and cool weather protection on the golf course.”

Also known as a snood or a neck gaiter and offered inmany patterns and designs, Kaymer chose with a 'Black Fly' from legendary designer Vaughn Cochran whose collection is a staple in many US anglers' gear bags.

It's made with CoolMax Extreme fabric to block 95% UV rays and wick away sweat in hotter months while providing an extra layer of warmth around the neck and to slide over your ears on cold days. Polygiene silver ion treatment prevents odor-causing bacteria keeps the Buff smelling fresh, we're told.

We've researched them and these Buff scarves can be bought from between £10 and £45.