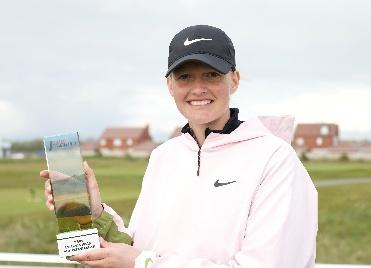 Cowley shot a 71 at the Merseyside venue to take home the top prize of £10,000, at an event which was supported by American Golf.

Cowley, 25, is a member of Hanbury Manor Golf Club in Hertfordshire and has now earned her place at the final of the series, which will take place at Bearwood Lakes in Wokingham on 25th September.

"I'm over the moon to win the event - it's been a fantastic day being out on the course able to compete again," said Cowley after her win.

"I spent lockdown practising at home with my TrackMan to ensure that I maintained my skills, but obviously nothing compares to being outside, working towards a title again."

"I took up golf at 13 years old when my dad started to take me down to the range and never looked back. I hope the Rose Ladies Series and other similar events encourage more females to get into golf as the enjoyment and satisfaction that comes from playing, and winning, is amazing."

Cowley became a professional golfer in 2014 after representing Great Britain and Ireland in the Curtis Cup.

The Rose Ladies Series was founded in 2020 and is funded by 2013 US Open champion Justin Rose and his wife Kate. This year, the event is also being supported by American Golf and Computacenter UK.

The series was intended to plug the gaps that had been left from the cancelled Ladies European Tour tournaments. It is hoped that the Rose Ladies Series will provide inspiration for women golfers to take part in the sport.

The series is split into three sections in April, May, August and September to coincide with gaps in the Ladies European Tour season.