Tiger Woods was involved in a serious car accident in February and had to be removed from his car by firefighters and paramedics. 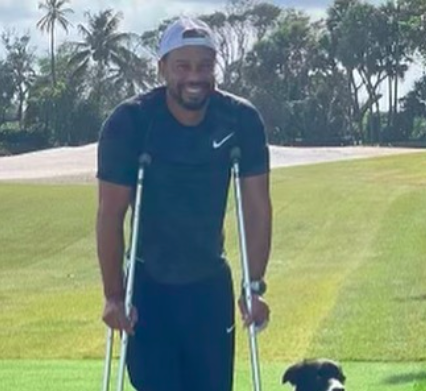 Golf fans across the world were delighted to see Tiger Woods in high spirits, as he posted on social media for the first time since his horror car crash in February.

The 15-time major champion was driving through California when his car veered off the road and flipped several times. Woods' car hit a tree and rolled to a halt before emergency services arrived at the scene.

Woods required surgery after suffering open leg fractures, as well as injuries to his foot and ankle. He was released from the hospital earlier this month with several injuries.

But today, the golfing world was provided with reassurance as Woods posted a picture of himself with crutches and a leg brace, at what appears to be the site of a golf course that the American is designing.

"Ayyyyyy. Good to see that smile!" one fan said.

"I can now have a good weekend," another fan said.

"He is gonna comeback and win another major again," one fan commented.

"We missed ya brother!" one fan said.

Many golf fans around the world held their breath as the news filtered through of the legendary golfer's accident, so Woods' post on Instagram has put a smile on many people's faces.

Woods' last appearance on the PGA Tour came at The Masters in November 2020, where he finished tied 38th and well behind World No.1 Dustin Johnson.

There is no doubt that the 45-year-old has an incredible fan base, as he has thrilled thousands of fans down the years with a staggering 82 wins on the PGA Tour.

NEXT PAGE: IAN POULTER'S SON LUKE SET TO CADDIE FOR HIM AT WELLS FARGO CHAMPIONSHIP