A round with a Wentworth caddie

Bagmen given the Augusta look 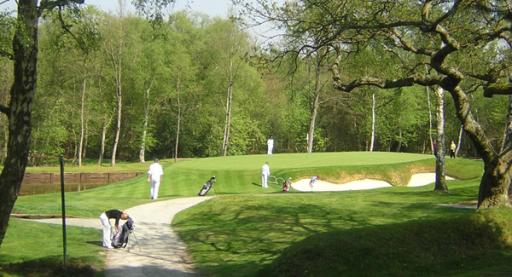 It was almost a double take! The caddies wore white overalls and olive green caps, the putting surfaces were firm and true, the course was in immaculate condition and was as tough for a handicap golfer as it could possibly be.

Blink for a second and I could have been transformed back to Augusta National in the Spring of 1991.

But though the sun was beating down through the pine trees, it was 25 degrees and I couldn't have been more privileged, this was the glorious Surrey in April when a group of us media hacks and hackers were invited by the BMW sponsors of Europe's second major, the PGA Championship, to taste the Wentworth experience.

Earlier we'd been entertained to a working breakfast in the clubhouse ballroom where World No.1 Martin Kaymer was the post-meal speaker and told us how he was looking forward to achieving one of his next goals - to win a tournament around the Wentworth's West course that we were about to play.

No bag carrying or even powered trolleys for us here - and buggies are only available accompanied by a chit from a Harley Street physician. Caddies are compulsory and what a cheery, helpful bunch accompanied our fourball.

My companion on the bag was Paul Smithies, whose bleached blonde hair has earned him the nickname of 'La Rue' (as in the late music hall star Danny).

Couldn't quite see the resemblance myself but he seemed quite happy with the 'handle' if not his distinctive uniform which on an unseasonably, blistering hot day had him and his pals perspiring before they'd reached the third tee.

I suggested that I would put a word in on their behalf with one of the leading golf clothing companies to maybe design a more lightweight version using the latest performance materials while retaining the all-white Augusta theme. They seemed intrigued by the prospect but weren't holding their breath!

I could quickly get used to having a caddie on my bag such was their attentiveness, even though my ability fell somewhat short of Mr Kaymer's.  Though the nod of respect from 'La Rue'  when 'up and downed' it from the cavernous bunkers beside the 2nd and 10th holes, told me that even the German would have been proud of those shots.

He also alluded to the 'royal we' when 'we' pitched and putted for an outrageous par on the 9th after a poor tee shot but told me with a grin on 12 that his recommendation after a tidy drive was to lay up short of the ditch. If I went for the green and found water it would be my fault!

I went for it, found the ditch and took seven...the second of three identical scores on successive holes which effectively ended my chances of total respectability and a share of any prizes.

"That's a pity, Sir," said my caddie forgetting momentarily the informality we'd agreed earlier in the round.  "You'd been playing well and hit some good shots."

I thanked him for his concern as I tossed him my ball to clean on the 14th (Toiur players do it, why not me?) but admitted that once fatigue sets on this course, it can bite you pretty hard.

I did, however, receive a thumbs up for a driver approach from semi-rough at the 477-yard par-4 15th and a pitch to the par-5 17th green to set up a bogey six which had looked unlikely when I'd committed the cardinal sin of pulling my tee shot into trees off the tee.

As we ambled down the new look 18th which has been tweaked to lower the green since Ernie Els re-designed it in 2010, he told me about some of the other visitors he'd caddied for including Wayne Rooney.

"It was great to be on his bag, especially as I'm a Manchester United fan," he told me. "It was a day out for some of the England lads and we were paired with Ashley Cole. Neither of them are serious about golf but they had a good giggle.

"I hadn't realised but Wayne has impared sight in one of his eyes. He told me that it doesn't effect his football but he'll get it fixed when he finally retires."

Rooney might also revert to a more orthodox grip instead of the left-below right he uses for all clubs currently.

Though he didn't reveal the exact amount, my caddie mentioned that carrying the millionaire footballer's clubs resulted in his best ever tip. And it wasn't for the 3.30 at Haydock!

I doubt the note of currency depicting the Scottish political philosopher Adam Smith that I handed over to reflect my gratitude, came anywhere close but I consoled myself with the view that it's the thought that counts.

So if you get the chance to play the West Course and want to splash out on a caddie, 'La Rue' comes highly recommended.

This loyal band of modern day man-servants add an extra dimension to any special round of golf and can be worth at least six shots a round for their green reading, club selection and encouragement.

Bob Warters
caddies
Wentworth
West course
Previous
Improve impact with Tour Striker
Next
Something for the Weekend: Narrow your stance at address