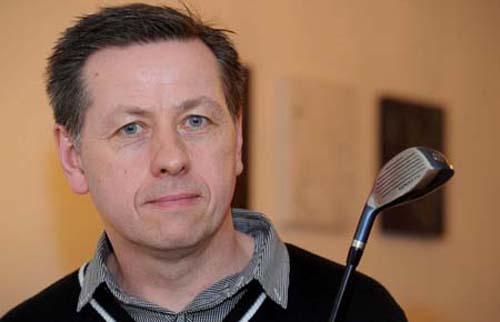 He scored his first with his opening tee shot at the par-3 18th - a winter tradition at the Aberdeen club - and his second at the seventh.

The 47-year-old recalled he’d only had time for nine holes because he was due to view a car.

The council technician said: “I was in shock. I found out later that the odds are the equivalent of winning the lottery four times - about 67 million to one.

“It’s pretty special. I’ll probably never do it again so I’m soaking up all the attention.”

“I didn’t think the ball was in the hole; I could still see it from the tee but it must have been resting against the pin before it fell in.”

Adam and his pals headed to the first hole and continued a normal round until they reached the 170-yard par-three seventh over a chasm.

“One of my playing partners was also close but when we got to the green there was only one ball in view,” he continued.

“I assumed it was mine but then my pal said it was my ball in the hole I couldn’t believe it.

“It was my penultimate hole and my friends were urging me to keep going to see if I could get a third!”

Officials at the golf club celebrated by gifting Adam a bottle of whisky.