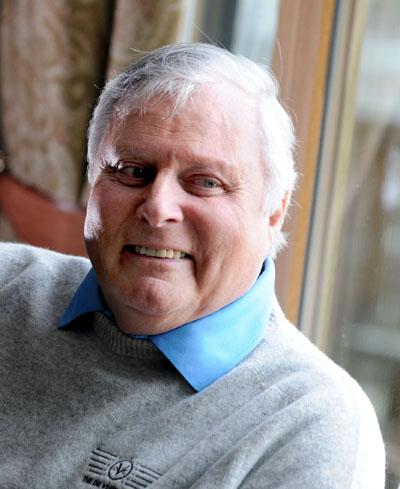 Peter Alliss has been the BBC's chief commentator on golf since 1978, when he succeeded the late Henry Longhurst. As the 'voice of golf' he has courted controversy with his remarks on air but also charmed millions of viewers with his unique observations on the topics and people that surround a televised tournament.

At the launch of the De Vere club scheme, at which Alliss was appointed honorary captain, Golfmagic forum members were offered the chance to supplement some of my own questions with one or two of their own, for the chance to win a fourball tee time for them and their mates at De Vere Oulton Hall at a time of their choosing.

We chose one of the questioners at random and the prize goes to Spartacus from The Wirral, who will enjoy a grand day out at the superb Dave Thomas-designed par-72 Calverly course, with its meandering fairways, strategically placed bunkers and subtle undulating greens.

Time constraints hampered our opportunity to ask every question submitted but here's a selection of those chosen.

You celebrated your 79th birthday on February 28, what did you get as a present? - Bob Warters

My wife bought me a stone Buddha for our garden. It weighs about - well it took four people to lift it -  and it's got a big belly and a smiley face.  I cut a tree down in the garden and he sits on top of the sawn off trunk. He's bronzy in colour and my wife says every time I go past him I should pat his tummy and we'll always have chicken on Sundays!

What was your first cheque as a pro and how did you spend it? - Smiddy

It was a white £5 note from the Coombe Hill Golf Club. As a 17-year-old assistant to my father at Ferndown I won my first tournament at Coombe Hill and it was presented by Donald Piers - a Welsh singer, who was the Bing Crosby of his day and a member there. I remember it was crisp and pristine and I wish I'd kept it because it would have been worth a lot more today. I don't know where it went but probably spent on wild women and booze!

Which player, in your opinion had the greatest impact on golf? - Poz

Ooh, there has been many! I didn't see him but he was a friend of my father - and that was Bobby Jones. There was also Walter Hagen and in my time Arnold Palmer and Seve Ballesteros.  I think Greg Norman also had a huge impact, which I think has been a bit forgotten.

There was the Big Three, of course - Nicklaus, Palmer and Player - and today it has to be Tiger Woods.

What excites you about the modern game? - Jay Jay

There are lots of things that disappoint me because it can be a very slow and pedestrian game but I do like it when someone gives the ball a really good swish off the tee. It's like a six over the pavilion clock at cricket. That pure animalistic whoosh of the driver still gives me a big kick.

What rule of golf would you change? - Rowdy

I'd do something about slow play. For professionals if every player could save a minute a hole, it would give back the best part of an hour. That would solve the problem but they b****r about and it's just stupid.

All this messing about particularly in televised tournaments. Everyone is frightened of breaking the rules and being penalised. I watch people drop a ball and they're an inch out so they must drop it again - to my mind, it doesn't make any bloody difference.

At 79 you must have an amazing level of energy to fulfil your commitments. What's your secret? - Spartacus (9.7)

Interest in people;  reading newspapers and magazines. I've never been a book reader; I've only read about 20 books in my life.  But I like conversation and television, I have an enquiring mind - that's my secret, I suppose.

If you could play one course for the rest of your life, which would it be? - Jon W

Ferndown. It's where I grew up and where my father was the pro.

Both you and your father were renowned long iron players. Do you think this elite skill has become moribund? - Chris Curry

Yes it's gone now. Longest iron now is a 3-iron. They all have these rescue clubs which have become fashionable. Not sure they're any better, it's just become the thing to use.

Pro celebrity golf was one of my favourite programmes. Is there a place for it in modern coverage? - Mike Ensor

There would be but they can't find a slot for it on the BBC.

Which player sticks out in your memory as the greatest to commentate on? - Hampshireless

I think I've answered about the ones with the greatest impact but as far as ex-players I've commentated with, David Feherty stands out as being whimsical and entertaining, while Johnny Miller can be very abrasive at times. I liked working with the late Mark McCormack, too because he was a statistician and I wasn't. Very few people liked him but I did.