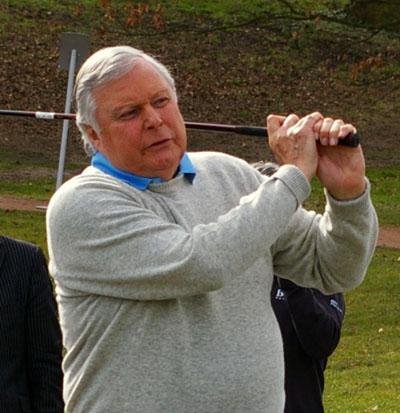 While Peter Alliss, the voice of golf on TV, is aware that he must watch his step on air as he commentates on the forthcoming US Masters from Augusta, he's still not afraid to speak his mind off screen, as I discovered when I caught up with him in Leeds at the launch of the De Vere Club.

In one interview he told The Mail on Sunday: "It will be the most difficult broadcast I have ever done. With my vocabulary and sense of humour, it would be very easy for me to end my broadcasting career in this politically correct world.

"I have to guard against saying something facetious or silly which I think is funny and somebody else does not think is funny at all. I want the viewers at home to know what I think about it.

"But I shall be mindful about what I say at The Masters. Broadcasters have been thrown out of Augusta in the past. It's very easy to say silly things."

However when we chatted at the De Vere Oulton Hall resort, he was in great form - outspoken, cheery and charming - in his honest appraisal of Tiger Woods' controversial return at the US Masters and the future of the Ryder Cup.

So what's your view on Tiger making a comeback at the US Masters?

I'm going to be two-headed here. One part of me says it's brilliant that he has decided to return at the Masters. The other side of me says, he's a coward, because it's so controlled he will be protected.  He's not going to be Daniel going into the Lion's den; he's hiding away.

I think that as far as they can, they will protect him but on the other hand I don't think they will fall down to his demands, if he has any.

I wouldn't have been surprised if the powers that be at Augusta said 'I'm very sorry, Tiger Woods but you're not using us as your kick-off to your season, we don't wish to have you here.' It would have slightly disappointed me because they're bigger than that and can handle it. But I think, however, some will wag a finger at him and say 'you've been a prat; don't think you can come here and use this event[ for your own purposes. You're coming here on our terms, if you don't like it, you can b****r off'

What do you think is the view of the other pros?

I think the pros have been p****d off at him. Ernie Els used the word selfish... perhaps not quite the right word but nevertheless I don't think they believe he has come out of this very well.

Oh, the fans, they'll be excited that he's coming back.

Can we win back the Ryder Cup in October at The Celtic Manor against the USA?

We need to win. The last time was a debacle, I thought. Some of the things Faldo did last time were just silly. I mean, riding about on a buggy, he looked as if he might have been on holiday with the kids. It was just silly.

I don't think he was particularly good and yet he was totally oblivious that he'd done anything wrong. I don't think he's arrogant it's just the way he is.

What about Colin Montgomerie as a captain?

I think Monty will be alright but we need to win. I don't think he's the most popular because of things that have happened over the last five years but I think he has a good personality, will care and be mindful of what needs to be done.

What about the venue?

Well where it is in the first week of October, it could be bloody awful weather. And that won't necessarily be to our advantage.

In fact I think the Ryder Cup could be defunct within 30 years. I'm suggesting this might happen because the Americans are pushing us [to play it] later and later [in the year]. And we're picking courses with hills overlooking water.

In four years time we're playing at Gleneagles at a similar time. I've been there a hundred times and you get mist and frosts and they're taking five hours to play a bloody foursome and then trying to get round twice in a day.

I think they'll push it and push it and start talking about stretching it to another day. And then the next thing will be they'll say 'we like playing the Presidents Cup' so why don't we all congregate for one match and have 20 aside?

Where the ryder Cup is in the first week of October, it could be bloody awful weather. And that won't necessarily be to our advantage.