Is the famous Craw's Nest Tassie the most popular competition in amateur golf? 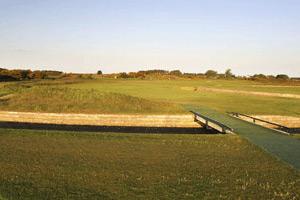 The anxiety of golfers to get playing again after this recent spell of winter weather and ensure their place in top competition was never better illustrated than by the demand for entry to one of Scotland's biggest amateur events - the 2010 Craw's Nest Tassie at Carnoustie.

It's still eight months away (September 5-11) and is due to be played over both the Championship and Burnside courses but Carnoustie Golf Links management committee has confirmed that all 338 places have already been snapped up within five minutes of the competition's online application system going live at 5 pm on Monday(January 11)!

The first entry was received 30 seconds after the online system was activated and exactly four minutes and 57 seconds later the complete allocation of places was filled.

It meant the tournament, for men with official handicaps of 18 or better, was fully subscribed two minutes quicker than last year and the speed at which places were filled confirms the Tassie's reputation as one of the most popular tournaments in the amateur game.

"It was incredible," said Colin McLeod, the CGLMC's golf services manager. "Last year, it would be fair to say we were taken a bit by surprise when the places were snapped up in just over seven minutes, but this year the response was phenomenal."

"We've have received entries from the US, Canada, Holland, Sweden and Spain as well as from all over the UK and Ireland. Some of the competitors have entered for the first time most come year after year, which shows how popular the Tassie has become."

The week begins with two qualifying rounds with the top 64 combined scratch scores drawn to play matchplay through the week for the Tassie on the Championship Course and next 64 nett scores competing head-to-head for the Maulesbank Trophy on the Burnside Course.

Those who do not qualify for either take part in consolation sweepstakes on Wednesday and Thursday with prizes available. By the time Friday arrives simple bounce games are played. The whole week is one of cameraderie and the local clubs open their doors to the competitors and provide evening entertainment - from comedians to quizzes to karaoke.

This year's Tassie is the 77th playing of an event that was inaugurated back in 1927. Last year's tournament was won by Kevin Dyckman, from Haninge, Sweden.

Golfers who wish to play Carnoustie Golf Links can log onto www.carnoustiegolflinks.co.uk, where they can check availability on all three of its courses and book a tee time.