Englishman believes it isn't important which Tour golfers play on 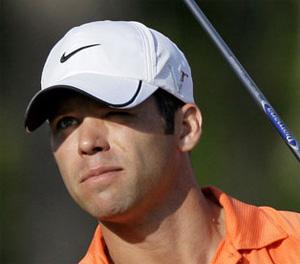 There has been a lot of talk recently about which golfers will be playing on which circuit.

Martin Kaymer, Lee Westwood and Rory McIlroy have pledged their 2011 season to the European Tour, while Louis Oosthuizen, Graeme McDowell and Ian Poulter will play on the PGA.

But Paul Casey believes it is no longer important which Tour golf’s top professionals play on.

“I think week-in week-out there is no doubt the PGA Tour is stronger in depth,” said the 33-year-old, a member of both Tours.

“But there are also seven Europeans in the top 11 of the world rankings. That’s got to be close to a record so the quality of the fields in Europe week-in week-out is extremely high as well.

“It doesn’t matter, these guys are just focused on playing the biggest events around the world. I don’t think it matters any more where your home tour is.

“The thing [Kaymer, Westwood and McIlroy] are going to miss out on is the FedExCup. That’s a huge amount of money - but then again they can make a huge amount in Europe too.

“They are still giving themselves opportunities to win all over the world so I don’t think they’re really limiting themselves.

“A lot of Americans will be sad they don’t get to see them as often and I understand that.”

The world number seven has an American wife, a home in the States and a PGA Tour card.

“I still enjoy playing around the world and because I have got a place in the States it is very convenient for me to play there,” he added.