How Poulter error cost him pounds and ranking points 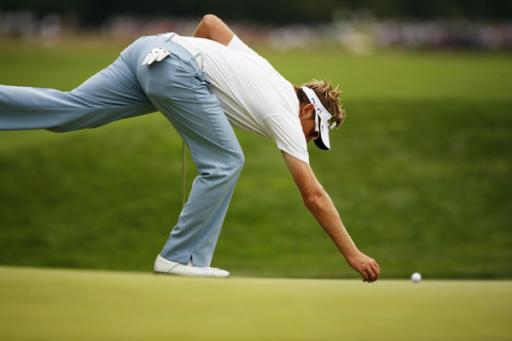 It was a bizarre blunder that perhaps cost Ian Poulter more than £350,000 and vital world ranking points at the Dubai World Championships on Sunday, but one that we've all experienced, surely, sometime in our golf careers.

The Englishman faced a tough 40 foot putt to take the championship into a third extra hole and was crouching over his 'lucky' marker, considering his line, when he accidentally dropped the Titleist ProV1x he was using on top of it.

The silver coin jumped up in the air like a tiddlywink and settled a few millimetres from its original position.

Immediately Poulter knew it was likely he had infringed the rules and called in referee Andy McFee, who confirmed a one stroke penalty (Rule 20-1, Lifting & marking).

As I understand it, had Poulter been in the process of replacing the ball in front of the marker and caused it to move, there would be no penalty as long as he replaced the marker in the exact position it was before. However, as he was still considering his line and by accidentally dropping the ball on it, incurred the penalty.

Similarly he could probably also have been penalised a shot under Rule 18-2(ii) which states that if a player's equipment (i.e. the ball) causes the marker (equivalent to the ball in play) to move, it must be replaced and he similarly incurs a one-stroke penalty. There are seven exceptions but none that I can see, apply in this case.

"It's a strange rule because if I had dropped the ball on the middle of the marker and it had not moved there's no penalty," said Poulter, who  still moved up to eighth in the world rankings.

"But I should not drop my ball on it. It's been my lucky marker since the start of the year and has got my kids' names on.

"There are always positives, but right now I'm not seeing them."

In most other sports players try to find a way to get away with a breach of the rules but it rarely occurs in golf. Asked how frustrating it was, the 34-year-old added: "About 20 world ranking points [23 to be precise], a lovely trophy and about $400,000 - that much frustrating.

"It's a shame it's just ended the way it has and it's not a consolation for me that Robert holed the putt in any case."

Poulter is not alone in experiencing a mishap with a marker, there have been several incidents on Tour over the years. Among them:

Jesper Parnevik tossed his ball to his caddie which he fumbled and dropped and it landed on his coin and it flipped over.

Again, under the rules there is no penalty provided the movement of the ball (or marker) is directly attributable to the specific act of marking the position of, or lifting, your ball. Panrevik suffered a one stroke penalty.

Recently on the Japanese Tour an Australian golfer marked his ball and before he could lift his ball marker, a gust of wind moved the ball to a new position. The player incorrectly replaced his ball and putted out but was penalised two strokes for putting from a wrong place (Decision 18-1/12). It's irrelevant if a player has removed the marker before the wind moved the ball, which is in play as soon as it is replaced.

During the 1997 Open Championship at Royal Troon, defending champion Tom Lehman was asked by Vijay Singh during the second round to move his ball marker off his line. Lehman forgot to return his marker to the original place before putting and realised on the next tee (before signing his card) that he should be penalised two shots (Rule 20-7c).

Two years later, Lehman was penalised only one shot for a similar transgression against the Italian Emanuele Canonica in the Dunhill Cup at St Andrews. He picked up his marker, but because it was medal match play he received only a one shot penalty.

Also at St Andrews in the 1957 Open South African Bobby Locke marked his ball one putter-head off the line of his playing partner Bruce Crampton at the 72nd hole. When he came to putt, he forgot to replace his ball marker in its original spot and putted from the wrong place.

The error was only picked up on newsreel film and reported to the R & A after the trophy had been presented and as Locke had a three shot lead a the time over Peter Thomson,it was decided after an eight-day delay that he had gained no advantage and his named was subequenbtly added to the Claret Jug.

Ian Woosnam was penalised at the 1991 World Cup when he picked up his ball and forgot to mark it in his haste to find a toilet. When he came to putt he looked for his non-existent ball marker which was still in his pocket!

Needing a par three to win and a four to tie at the last hole in the 1999 Greg Norman Holden Classic tournament at Lakes Golf Club in Sydney, Bernhard Langer lost by one shot to Michael Long of New Zealand when he picked up his marker without first replacing it with his ball. He incurred a one-shot penalty and recorded a double bogey five.

Tell us on the forum about some of your ball marking blunders.