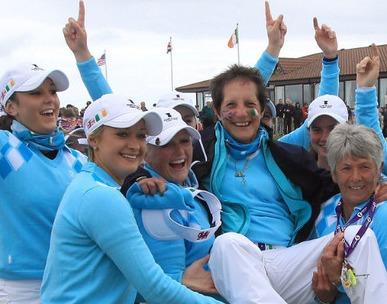 For the first time in history, Great Britain, Ireland and Europe hold all four major professional and amateur men's and women's team trophies after the GB&I Curtis Cup girls claimed an emotional one-point victory at Nairn Golf Club in Scotland.

GB&I wrestled the Curtis Cup away from American hands after winning five of the eight final-day singles matches to secure a thrilling 10½-9½ victory.

The hosts headed into the final day trailing by a point but victories from Kelly Tidy, Amy Boulden, Holly Boulden, Charley Hull and Stephanie Meadow saw GB&I lift the trophy for the first time in 16 years.

Meadow secured the monumental victory with a 4&3 victory over Amy Anderson, ensuring the trophy remains on this side of the Atlantic alongside the Ryder Cup, Solheim Cup and Walker Cup.

Meanwhile, in the wake of the triumph, officials announced that Dun Laoghaire Club in Ireland will host the 2016 match.

Ireland has staged the biennial women's amateur team event only once since the Curtis Cup started in 1932 - Killarney Golf and Fishing Club hosting in 1996 when GB&I claimed a third consecutive victory.