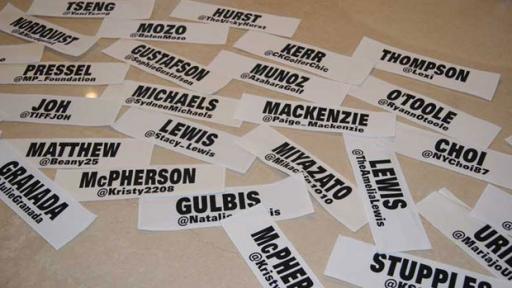 The LPGA Tour is pushing the social media envelope by identifying players competing in tonight's first round of the Wegman's LPGA Championship with their Twitter handles on their caddies' bibs.

The bibs will be worn for the first time during all four rounds of a major and will feature the last name of the player with their Twitter identity.

Fans at Locust Hill Country Club and those watching on TV, says the LPGA, will directly connect with the players through this social media platform.

“Everyone at the LPGA is working hard to get our message out and create more awareness for the Tour and our players.

“Our goal is to be forward thinking. The early response to the idea has been terrific. We feel that our players are among the most accessible and fan friendly athletes in sport. This is yet another reason for people to ‘See Why It’s Different’ on the LPGA Tour.”

More than 120 LPGA players are on Twitter, including 93 players in this week’s field. Earlier this season, the Tour launched a brand campaign video spot about Twitter featuring Michelle Wie (@themichellewie) and Suzann Pettersen (@suzannpettersen).

Yani Tseng, who won by an incredible ten strokes 12 months ago, has recorded three victories so far this season at Honda LPGA Thailand, RR Donnelley LPGA Founders Cup and the Kia Classic.

Her nearest rival could be Mizuno’s Stacy Lewis who starts as World No. 3 after claiming the ShopRite Classic at the weekend, following an eight-shot victory over Tseng.

Is this taking Twitter too far or could it soon be seen in European Tour events? And what's to stop the amateurs tweeting along with 'handles' on their caps? Tell us your views on the forum...