Purdy sets new mark with one hit every 6 seconds 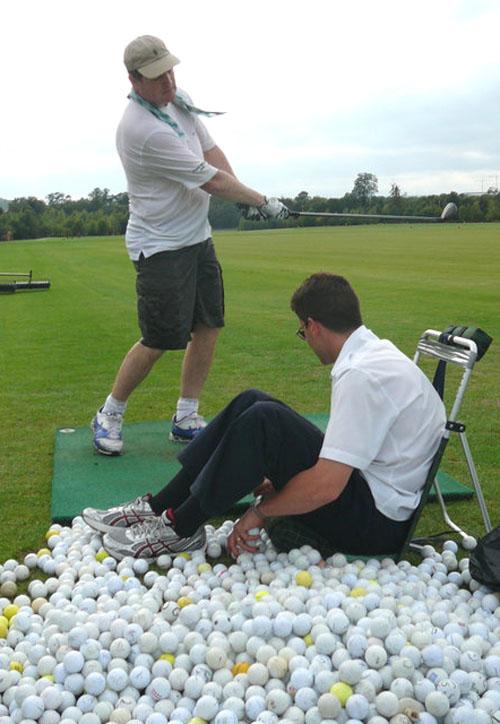 A 13-handicap amateur golfer has broken the world record for the number of golf balls hit in a 12-hour session.

Steve Purdy smacked 7,917 balls – the equivalent of one every six seconds – during the sponsored attempt that has raised over £12,000 for The Cystic Fibrosis Trust.

The strict rules for the Guinness Book record demanded each ball had to travel at least 100 yards, within a 30-degree arc of the tee in order to qualify in the final count.

Steve, a company manager, who played top-flight rugby as a full back for Moseley (1988-96) and Worcester (1996-97), achieved the feat at the Gog Magog golf course in Cambridge, where his father Stan and brother Mark are members.

He was cheered on during the marathon effort by family and well-wishers, who included ex-England and Lions rugby player Martin Bayfield, a friend from childhood and a former teammate, who has also appeared as a stuntman in Harry Potter films.

Steve began his record attempt using a 5-iron but switched to a 3-wood early when he needed more power. He broke the record after 11 hour 35 minutes of constant swinging and switched to his driver to cruise past the previous record by 196 shots.

Steve, who is general manager of Lexmark UK, undertook the back-breaking feat to raise money for research into cystic fibrosis, one of the UK's most common, life-threatening, inherited diseases. His 13-year-old niece Zoe was diagnosed with the disease at birth.

“Hitting ball after ball after ball was a surreal experience,” he said. “I had to dig deeper mentally and physically than I have ever had to before. I would never have managed without all the support and encouragement I had on the day.”

He added: “I had blisters on my hands and feet, but wasn’t as sore as I’d
imagined I’d be, although it was difficult to clench my fingers for 48 hours afterwards. The biggest problem on the day was standing up for 12 hours and maybe I didn't get the right fluids. At times I felt lighted headed and dizzy but I've now made a full recovery.”

Steve’s feat was recorded on video and the balls counted by the Gog Magog committee members. The evidence for the record will be ratified by the Guinness World Records, to confirm it beats the previous mark of 7,721 set by Nigel Mangan at the PGA Merchandise Trade Show in Orlando, Florida earlier this year.