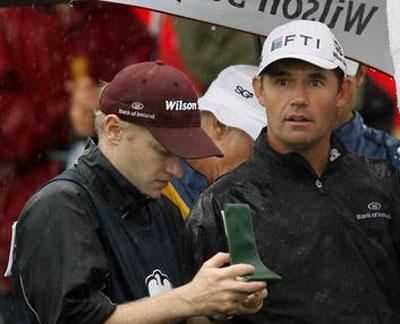 A Dublin-bound flight with Padraig Harrington and brother-in-law caddie Ronan Flood on board was at the centre of a take-off scare in dense fog in Abu Dhabi.

Ireland’s three-time Major champion and Flood, returning from the Abu Dhabi Golf Championship, were seated in the business class section of an Etihad Airways A330-200 aircraft when it allegedly struck landing lights while taxiing down the runway to prepare for take-off.

Along with 200 other passengers and crew they felt a jolt as the plane came to a halt. A spokesman for the airline later admitted that the aircraft was forced to abort its take-off when the left tyre on its front landing gear punctured.

The pair were forced to wait 12 hours at the airport before returning and the accident led to massive disruptions in the busy Emirates hub.

Harrington has dropped to 90th in the world rankings, despite playing all four rounds in Abu Dhabi.