How to spot the golf cheat

Golfmagic guide to the dark art 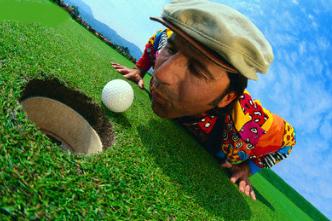 It is reported from Canada, that ‘Cheater’ pants – trousers that are sold with a ready made hole in the pocket to assist the golf cheat to illegally drop a golf ball into play – are selling well.

Golfmagic thought it was time, therefore, to reveal the dark art of cheating at golf and how to spot the criminals and catch them red-handed – and red-faced. Here’s the Golfmagic guide to golf cheats and how to stop them!

Watch how the cheat marks the position of the ball on the green.

Invariably they will use a big coin, like a 50p or inch-diameter foreign currency, carefully sliding the coin as far as possible under the ball. When replaced, the distance between ball and coin will be at least an inch nearer the hole or slightly to the side to avoid a spike mark or blemish on the green.

Occasionally they will surreptiously toss another coin a few inches, or even feet, nearer the hole (depending on the length of putt they face) and ignore the original marker to give themselves a closer putt.

Watch, too when a marker in an opponent’s putting line goes down nearer the hole when measured a putter head’s length – the angle changes when replaced and the cheat steals an inch or two.

Staked trees allow a free drop within one club length of the ‘nearest’ point of relief from the obstruction but invariably, the cheat wants full advantage from the situation.

For example a drive off the tee is hooked into a plantation of staked young trees on the left of the fairway and finishes within inches of the right-hand side of a staked sappling. The cheat would automatically deem the clear, fairway side to be the dropping area on the right of the tree. However, chances are that left of the tree is the nearest point from which a full swing and unimpared stance can be taken – then one club length from there, no nearer the hole.

Watch too, that the ball is dropped from shoulder height – not knee level to affect a better lie.

Look out for the casual nudge of the ball with the toe cap in the rough – known in the trade as the ‘leather wedge’. Another trick is to casually press down the grass behind the ball with sole of the club or the foot, for a cleaner impact.

The Rules declare a ball can be handled only between holes; on the green after it is marked; to take a free or penalty drop; when preferred lies are in operation or to identify it other than in a hazard.

Given a bad lie in the rough, the unscrupulous golfer will pick it up to supposedly identify it (okay under the Rules as long as the act is witnessed by a fellow competitor) but then replaces it in an improved position.

A ball played into a water hazard is a one stroke penalty but the next shot must be played keeping the point of entry between the hole and the point from which the next shot is to be played.

The cheat will tend to steal a few yards to the right or left to allow play over the narrowest stretch of water possible – if at all!

Only pitch marks and old holes can be repaired or loose impediments removed on a green. The cheat will nonchalantly declare spike marks on the line of a putt fair game and if challenged will look incredulous but never guilty.

Cheats rarely have good memories – especially when it comes to scoring. They will claim a four when taking five or six shots or dismiss an air shot as a practice swing.

Suspects should be watched carefully when you know they have miscounted. If they persist, simply refuse to sign their card.

Cheats rarely show good manners or have consideration for etiquette. Stunts include whistling, coughing or rattling change on your backswing, casting a shadow across your putt or tee shot, noisily identifying major hazards and out of bounds as you prepare to play (unless you haven’t already spotted them!).

If there’s a chance of their handicap being cut without the incentive of winning a prize, cheats will tend to take unnecessary shots over the last few holes or fail to submit their card.

Cheats have also been known to falsify or declare false handicap certificates, when playing in Open competitions when major prizes and sweeps are at stake.

Relief cannot be taken as casual water when water appears when pressing a footmark down. Water must come to the surface as a result of normal pressure from the player’s feet when taking a stance.

And finally… If you spot someone cheating, Golfmagic’s advice is to be sure you are 100 per-cent certain and have a witness (it may be that they are merely ignorant of the appropriate Rules).

If convinced, then quietly take the player aside and advise them it is against the spirit of the game and that they have the chance to accept the appropriate stroke or hole penalties) while promising not to report them unless there is a further transgression. Have you spotted any other ‘cheating’ situations? Why not share them with us on The Forum. But no names of ‘guilty’ parties, please – none of us wants to have to justify ourselves in court!