In the Bag: David Howell

We delve into the Alfred Dunhill Links champion's bag 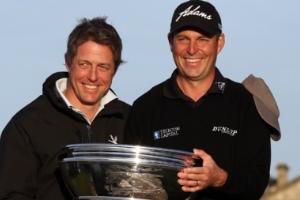 Form is temporary. Class is permanent.

Winless on the European Tour for exactly seven years and four months, David Howell chose the perfect place to bounce back to winning ways by claiming the Alfred Dunhill Links Championship at St Andrews yesterday.

Following in the feel-good comeback story of the year set by Henrik Stenson just last week in the FedEx Cup finale at East Lake, Howell, who was ranked as high as ninth in the world in 2006, will now jump 82 positions in the rankings to 94th - his best ranking since September 23, 2007.

The Adams Golf Europe staffer carded a final round of 67 to set the clubhouse target at The Home of Golf and then watched as overnight leader Peter Uihlein missed from 15-feet for a winning birdie on the 18th, meaning the pair finished tied on 23-under.

Both players narrowly missed long birdie attempts on the first extra hole but Howell, who had lost all four of his previous play-offs, made no such mistake from eight feet when action switched to the 18th to claim the title and first prize of €589,561.

"It's incredible, the sun is shining and the crowd have come out," said the 38-year-old Englishman, with five European Tour titles to his name and two victorious Ryder Cup appearances in 2004 and 2006.

"I have never played in an Open Championship here but to win a golf tournament as a professional at the Home of Golf is quite amazing and I am really thrilled.

"I was really nervous all week and strangely less nervous today - I can't explain that at all. I stayed calm and smooth under pressure and that was really pleasing.

"It's been a long, long road from the depths of despair. I have had a lot of support from people around me and this is as much for them as it is for me.

"The downs were pretty low and I lost my way in life and on the Tour as well. Off course I was not a happy camper and made some bad decisions around 2008 and took some time to sort through them. I owe Emily (wife) a debt of gratitude for having me back and showing me that we were always going to be a happy couple in the end.

"This is a sweet moment to be happy and settled with Emily and Freddie at home and the twins on the way and to win a massive championship seals the deal. Hopefully it can spur me onto bigger and better things."