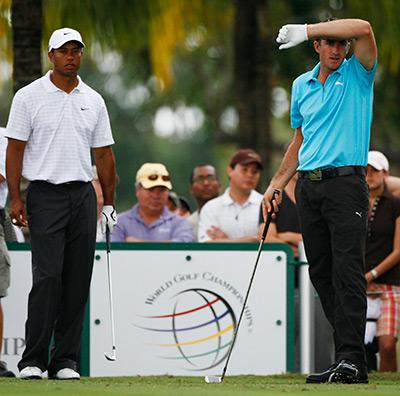 GEOFF OGILVY believes the public spat between Tiger Woods and Brandel Chamblee could have been avoided had the World No.1 not given so many 'nothing interviews'.

Last month, Chamblee said the 14-time major champion was 'a bit cavalier' with the rules in 2013 following three high-profile rule controversies. Chamblee later backtracked, however, explaining on-air that he 'went too far' by citing Woods had cheated.

In his own column for Golf World magazine, former US Open champion Ogilvy made it clear the feud between the duo could have been prevented had Woods been more authoritative in the media centre.

"It could have been avoided had Tiger given open answers to questions – ‘real’ interviews, not just ‘nothing’ interviews," wrote the Australian.

"But because Woods decided not to explain the various incidents at the Masters, Players Championship and BMW Championship, it only encouraged all kinds of rampant speculation and generally ill-informed conspiracy theories."

Ogilvy added: "Players would be better off not being so precious about what appears in print and on-screen.”

“Journalists and broadcasters should not be mere cheerleaders. There’s too much of that in golf right now, to be honest. And not nearly enough untainted honesty. If correspondents do nothing more than claim how great everything is, any semblance of reality is lost.”

Did Brandel Chamblee accuse Tiger of cheating way back in 1999?

What do you make of Ogilvy's comments about Tiger? Are you with Chamblee or Tiger on the No.1's rule controversies this year? Share your thoughts in the forum below or you can tweet us @Golfmagic