Quotes from the PGA Championship

After Jason Dufner closed out his first major victory at Oak Hill, here is a round-up of what some of the big players this week had to say. 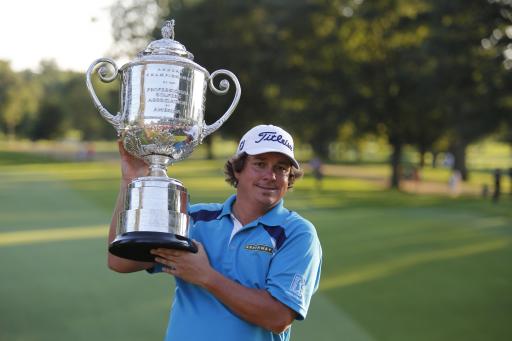 The 36-year-old from Ohio trailed Furyk by one shot heading into the final day, but put himself in the box seat with three birdies in his outward nine.

Dufner was calm and composed coming down the stretch, and duly closed out in relative comfort, despite bogeying the difficult 17th and 18th holes - the only blotches on his scorecard for the day.

The win put right the disappointment of throwing away a five-shot lead to Keegan Bradley at the 2011 PGA Championship for Dufner, finally getting his hands on the Wanamaker Trophy.

"This is such a great course, it is a pleasure to play here and it’s just such a great feeling to win here," Dufner said.

"I just decided that I was going to be confident and really put my best foot forward. I wasn’t going to come out today and be scared or play soft. It was a shame to bogey the last two but I got the job done and this is a massive moment in my career."

Dufner revealed he also watches other sports for tips on how to deal with pressure situations, but was typically down-to-earth when explaining his muted celebration on the 18th green.

"I watch a lot of sports, and one of the reasons I watch is to see how these guys handle pressure, how they respond to situations.

"Big plays in basketball, home runs in baseball, big plays in football. That will get you pumped up. For me, golf is a little bit more boring. I hit it in the fairway or I didn't. Usually I'm struggling with the putter, so there's not too much to get excited about with that."

Tiger Woods' challenge never really got going and the World No.1 had to settle for a share of 40th.

"I put four good rounds together last week, unfortunately it wasn’t this week," Woods said. "I didn’t seem to hit it as good and didn’t make many putts until the last few holes but I didn’t give myself many looks and certainly didn’t hit the ball good enough to be in it.

"It’s more frustrating not being in it. Having a chance on the back nine on Sunday, I can live with that. It’s always frustrating going out there. I’m grinding my tail off coming in just to shoot even par for the day and I’m nowhere in it. That’s tough. I’d much rather have it like at Augusta or at the British, when I have a chance."

There was a happier outcome for Rory McIlroy, who finally looked like he was on an upward trajectory in finishing T8 after a season to forget in 2013.

"I played the best golf of the week today," McIlroy said. "I hit some really good drives and really good iron shots. Didn't quite putt as well as I did the first three days, but really, really happy with my game going into the next few weeks.

"It's a very big step in the right direction. I saw a lot of great signs out there today. Hopefully I can just bring that through to the next few weeks and have a strong finish to the season.

"I made a big number on five although I hit a good shot - exactly what I wanted to do with it. It just pitched in the exact wrong place. Everything else feels pretty good."

Jim Furyk finished second but insisted he had no regrets about missing out on what would have been his second major victory.

"I wish I could’ve put some heat on him. I wish I had made him work harder those last two holes. I’ve had some chances to close it out, and I wasn’t able to get it done, but I guess it’s days like this that will make the next one sweeter."

"It’s great to stay top of The Race to Dubai after another excellent week, and to even extend my lead. I’ve been playing extremely well and I’ve enjoyed being in contention in some big tournaments.

"Obviously I’m disappointed I haven’t come away from any of them with a trophy, but this bodes very well for the rest of the season and hopefully I can continue this form to the end of the year."

Phil Mickleson had a weekend to forget, shooting 78 and 72 to end up tied for 72nd.

"I didn’t play very well the last two weeks, but I’m not going to worry about it," he said. "I’m going to go just work on my short game at my home, just chip and putt, and then wait four or five days before I start hitting balls again, because I want to just kind of forget these couple of weeks where I really haven’t struck it the way I had for a few months."