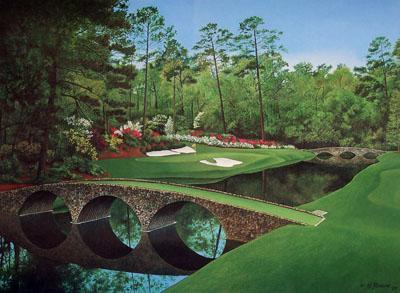 It can only mean one thing; golf’s most prestigious event is finally upon us, as all eyes turn to Augusta National for the 77th staging of the Masters Tournament.

The golfing equivalent of a child’s trip to Disney World, this course really is a magic kingdom. Something of a holy grail for golfers, the goosebumps emerge as soon as you drive down Magnolia Lane and see the famous Masters emblem nestled innocently on the lawn by the clubhouse.

The only major to be played on the same circuit since Bobby Jones’ memorable course design in 1933, Augusta holds a very special place in our hearts because of the memories it has provided us with down the years.

From remarkable feats and unbelievable shots - including Jack Nicklaus’ historic sixth Masters title in 1986, and Tiger Woods’ stunning chip on the 16th - to spectacular meltdowns such as Scott Hoch’s missed 3-foot putt in 1989, Greg Norman’s final-round 78 in 1996 and Rory McIlroy’s fall on the Georgia hills in 2011.

The first major of the season has witnessed all the highs and lows of world-class golf. Yet it’s not just the memories that make this one so special, as golf and nature come together to witness something truly incredible.

With breathtaking bursts of colour at every turn, echoing roars through pine trees and a picturesque Amen corner featuring the scenic Hogan’s Bridge at the par-3 12th, The Masters has our undivided attention for all four days.

Other unique characteristics include a par-3 contest on the eve of the first round, white jumpsuits and green caps for caddies and Arnold Palmer firing the opening shot of the tournament.

But trumping them all is the coveted Green Jacket presented to the winner, symbolising a golfer’s entry into the exclusive club. The most recognised trait in the tournament, it is a prized possession worn by the greatest of all time.

The champion also receives a substantial seven-figure sum, silver replica of the clubhouse and honorary membership - but just who will be packing their bags with all these accolades on Sunday night?

It takes a mixed bunch of attributes to master Augusta National. The champion will need to be at the top of his game throughout, ooze confidence from day one and embrace his sense of destiny on Sunday’s back nine.

On top of all that, this special golfer will need his fair share of luck - a drive that hops out off the rough and into the fairway or a putt that uses all of the hole instead of lipping out.

Here at Golfmagic Towers, our ideal winner of the 77th Masters will be someone who hits it long and putts it strong. There are some holes at Augusta where you can get away with an errant drive and judging by recent results, you need to be a bomber to win here now.

Seven of the last nine champions have driven the ball in excess of 300 yards on average and last year saw four of the top six average 295 yards plus.

With treacherous greens likely to be running at a rapid 12 on the stimp, it will be imperative to hit short irons into tricky-positioned flagsticks over the weekend.

It will take nerve and skill to get the job done on Sunday but it will also require a steady hand and silky smooth putting stroke when tension reaches its peak.

Finding the middle of the green instead of getting too aggressive will be an ideal play and eliminating three putts from outside 30-feet will be pivotal.

Alex Perry and Andy Roberts
Augusta
masters
<
Previous
Win a Cleveland 588 wedge AND play Bearwood Lakes!
>
Next
Miura develops deep face driver
Latest News
Equipment news
Bad blood and "p***ing off" players: LIV Golf's headache for OEMs
Golf news
GEO Foundation launches Sustainable Scorecard as part of special week
Golf news
Paige Spiranac opens up on size, fat-shaming and being "a loser"
Golf news
England cricket star Jonny Bairstow ruled out for 2022 after freak golf injury
Equipment news
Charley Hull: What's in the bag of The Ascendant LPGA champion
Latest Reviews
Drivers
Are they WORTH IT? Titleist TSR Driver Review | TSR2, TSR3, TSR4
Irons
Caley Golf Iron Set Review | Is this the best value iron of 2022?
Putters
Zebra Putter Review | "One of the most popular golf products ever!"
Wedges
A Spin MACHINE! Callaway JAWS Raw Golf Wedge Review
Wedges
Their BEST Yet?! TaylorMade Hi-Toe 3 Golf Wedge Review
Equipment Reviews
Equipment
FootJoy's Blues Collection is perfect for your game this summer!
Equipment
Peter Millar have an AMAZING selection of golf shorts!
Equipment
The BEST PUMA golf polo shirts as seen on the PGA Tour!
Equipment
The BEST Nike Golf shirts as seen at the PGA Championship
Equipment
NEW VICE Pro Drip Silver Hills Golf Balls: Limited Edition
Latest Tips and Instruction
Tips and Instruction
DP World Tour pro Hurly Long and his meditation technique...
Tips and Instruction
Learn how to chip like a winner on the DP World Tour!
Best tips and instruction
What can we learn from Jordan Spieth's new pre-shot routine on the PGA Tour?
Tips and Instruction
How to NEVER MISS another short putt with Manolo Vega!
Tips and Instruction
Sergio Garcia tells Me and My Golf GREAT driver tip: "Pull the chain!"
Related Articles
Golf news
Golfer goes flag-hunting and STIFFS it to an inch on a green surrounded by lake
The Masters
Gary Player's son BANNED from The Masters after SHOCKING golf ball stunt
The Masters
Justin Rose leads The Masters after stunning round of 65
The Masters
Rory McIlroy HITS HIS DAD with errant shot at The Masters
The Masters
The day Craig Parry was confronted by a patron at The Masters