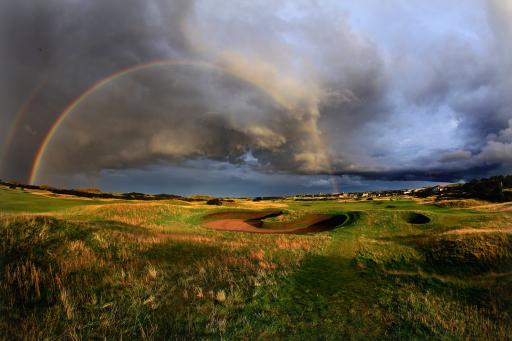 The Open to me smells dusty, sandy and of the seaside. That combination of sea air and dust makes for a lovely fresh feeling.

St Andrews is always special and the area around the R&A clubhouse, the Swilcan Bridge and the Road Hole is just so iconic.

The Open will always be my favourite major and in my heart the one I would want to win, but Augusta and that back nine is pure excitement. There is always the thrill of thinking you’re going to get amazing pictures.

Shooting Augusta: Day in the life of a Masters snapper

Choosing my favourite Open picture is easy. It’s a sequence of Seve Ballesteros on the 18th at St Andrews in 1984. It was my third Open as an official photographer – I’m on my 33rd now.

Seve was my hero, but Tom Watson was the superstar and they were both in contention at the end. That made it a difficult choice who to follow, but I went with Seve down the 18th.

I sat on the bank behind the green to get the best background. I also had a little premonition, so I wasted half a roll of film and shoved a fresh one into the camera.

When Seve holed that birdie putt, meaning Watson needed a two up the last, it sparked the biggest and longest final-green roar I’ve heard at the Open, possibly alongside Justin Rose holing his pitch at Birkdale in 1998.

Seve did that great fist pump and then stood there pumping the air. Cameras did five or six frames a second in those days so I had six seconds of ammunition and went right through the whole roll. The lovely smiling one of him looking straight at me was taken in the last two or three frames. Thank God I put a new roll in. A few photographers didn’t and missed that.

Simon Dyson column: Why the Open is the best major by miles

I drove back to London overnight and had to wait a very agonising 12-15 hours to get the film processed. The relief and excitement was staggering, I can’t really explain it.

It was the same when Jack Nicklaus holed that putt on the 17th at the Masters in 1986. I flew back to London and didn’t see the results until the Tuesday lunchtime.

The thought of losing that bag of film, or getting it damaged by X-rays is mind boggling, especially when you think how much those pictures are worth now, although you can’t quantify it.

Seve got his image tattooed on his arm. I remember teasing him about that later: “Hey, image rights, Seve”. He just laughed and said, “you make so much money”.

We had a great relationship. I always gave him pictures. I let him use it for his company logo and the European Ryder Cup team had it on their bags at Medinah in 2012.

I hope everyone makes a fuss about Seve at St Andrews. I don’t want him to be forgotten. That picture is part of it. It would have been so cool if he could be there talking about it.

It’s very difficult to photograph the Old Course at the Open because you’re very restricted where you can go. The “inside” areas between holes are off-limits because of the double fairways.

Ken Brown reveals his keys to the Old Course

The double greens bring their own issues, too. You are miles from the players sometimes, especially if they put the pins away from the crowd lines. It’s also very flat.

Certain holes very rarely give good pictures. Standing on a bank behind the sixth green and around the turn are the best areas away from 17 and 18.

This year Getty Images are loaning me out as an official photographer for the R&A for the first time.

Lots of governing bodies are doing this now. The R&A realised they didn’t own a single picture.

So me and three others will actually be allowed on the fairways. This will be the first Open with that unique access and hopefully we will get a chance to get some really different pictures. I tend to camouflage myself behind the TV camera crews so I can blend in.

We have also got some interesting technology for the first time. We have robotic cameras mounted under the hoist cranes which are operated inside the press room. It is the first time it has been done at St Andrews and that should give us amazing views of 17 and 18.

The special access means we can get much closer to the players on the second shot to 18 which should give some lovely angles of the clubhouse and the big grandstand behind. Hopefully, it will look stunning on a lovely sunny evening.

On the first morning of the Open, I always get up with the greenkeepers so I am at the course about 0330. You get the sunrise, shots of them working, and Peter Dawson and co. setting up the holes.

Hopefully, with some lovely low sun you can make some nice arty pictures.

The last time the Open was at St Andrews it rained cats and dogs all night and there were floods on the first fairway, but that made some good pictures with them pumping water by the Swilcan Burn.

I quite enjoy those days and it can make a nice picture with a player under an umbrella, with rain pouring off and a less than delighted face. That’s the beauty of what we do. It’s always a challenge.

The biggest problem is getting good waterproofs. It can be a bit miserable with wet feet - these Gore Tex walking shoes say they are waterproof but I haven’t found a pair yet that actually are. In the US Open at Merion in 2013 I almost got trench foot.

But I now take seal skin socks everywhere. They feel a bit funny to wear but they keep your feet absolutely dry.

I’ll do the first tee shots at 0630 and then grab some breakfast before going out with some of the early marquee groups around 0730.

I’ll take a long walk out to the turn and then come back for a rest at lunchtime. In the middle of the day I am looking for action shots, moments and crowd pictures.

This year will be very interesting - I reckon they are probably at least 20 yards longer than in 2010. I think the Dustin Johnsons of this world will hit the ball into places you haven’t seen on that golf course.

The ninth, 10th and 12th could all be in range and we could be some heavy scoring around turn. But equally St Andrews has its own defence mechanisms with pin positions and bunkers. That’s really what it’s all about. You’ve got to play a chess game and steer clear of the bunkers.

Short of the 11th green there is a really cavernous pot bunker that is a magnet to balls so there is always plenty of action in there. And there might be some players in the gorse around the 12th, too.

The sad thing for me is that “Hell” bunker on 14 never comes into play any more in the Open unless there is a howling gale in their faces.

Ideally, you’d shoot in the first hour and last hour of the day in summer because most of the shadows have gone by 6am, but then there are no players around.

You do get a bite of that cherry with some of those late finishers on the first two days of the Open. I love staying out for the stragglers. They often make amazing pictures coming down the last few holes. If it is a sunny evening the last hole can look like the surface of the moon if the sun is really low.

St Andrews golf guide: The Old Course is not the only gem

On Friday, I have to do a helicopter shoot where we will photograph the whole site for the R&A so they’ve got a blue print for the next Open at St Andrews.

Then we’ll do some shots to get used in the media so we will try to time our flight so we get big-name groups going down the last and up the first to get a concentration of crowds.

If the days aren’t busy enough at the Open, the nights are equally packed, with my 60th birthday on the Monday and various official engagements.

Otherwise, you might find me in the  Dunvegan pub. It’s loud and busy and right on the corner. You’ll find caddies and players alike in there.

I love this one of Costantino Rocca’s putt from the Valley of Sin in 1995, when his chip rolled back to him but he holed the putt to get into a play-off with John Daly and fell to his knees and looked up to the heavens.

Tiger’s first win in 2000 produced a great picture. The moment he lifts up his arms, Ollie is in the background making a strange face. I  thought that was quite cool.

An arty shot of Rory McIlroy on the sixth tee during the 2010 Open.

Rory began with a 63 but was blown off the course with an 80 in round two. This shot of him during the delay because of strong winds tells its own story as Louis Oosthuizen went on to win the Open.