Here are ten of our favourite golf movies. Does yours feature? 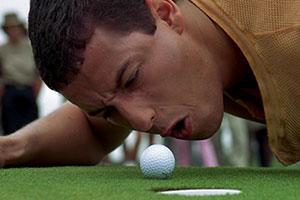 The summer may be all but over but many of you will still be sitting down to watch your favourite golf films for inspiration late on in the season - or just for a laugh.

Here are our picks for the top ten golf movies of all time...

A gifted golfer who is too nervous to play in public tournaments takes his friend, Joe Anthony, under his wing and acts as coach and caddy.

This comedic golf movie starred a number of professionals from the era including Ben Hogan, Sam Snead, Byron Nelson and Julius Boros.

A dramatic golf movie with religious undercurrents, the film is based on the book Golf’s Sacred journey: Seven Days at the Links of Utopia.

After a disastrous debut on the pro circuit, a young golfer finds himself unexpectedly stranded in Utopia, Texas, and is welcomed by an eccentric rancher.

Another dramatic golf movie revolving around characters whose lives are transformed one summer at an exclusive East Coast country club.

A promising 12-year-old golfer learns about class divide as he caddies at a club for the summer eventually getting lessons from an ex-pro who teaches him more than golf alone.

A second-rate pro golfer is desperate for some golfing success (aren’t we all!) so he joins the PGA Tour and travels the country.

Based on the Novel by Dan Jenkins, this golf movie adaption shows the ups and downs of life on tour.

A biographical dramatic golf movie based on the life of legendary golfer Bobby Jones. Jones is the only golfer to win all four majors in one year and retired from competition at 28.

This was the first movie to film on location at St Andrews.

Made by Disney, this film tells the story of the 1913 US Open when a 20-year-old man, Francis Ouimet, played and beat his idol, 1900 US Open Champion Harry Vardon.

An uplifting story of an underdog triumphing, in true Disney style it’s highly dramatised but still a great watch. A golf movie staring Shia Labouf? Great one for the ladies.

One of the few rom-com golf movies starring Kevin Costner as a washed up golf pro who ends up trying to win the US Open in order to win a girl back from his rival.

You'll end up rooting for Costner who is brilliant in his role as a beer-swilling layabout.

A box-office cast of Will Smith, Matt Damon and Charlize Theron star in this golf movie about a down-and-out golfer who attempts to recover his game and his life with the help of a mysterious caddy.

Smith plays the inspirational bagman with Damon the golfer trying to find his form. Theron provides the love interest.

Caddyshack and Happy Gilmore are probably the most famous golf movies and they are both goofball comedies about golf.

At an exclusive club it’s snobs vs. slobs as the working-class caddies constantly battle to earn respect from the members. Stars Bill Murray.

You can bet your favourite putter there will be one person at the range who tries the Happy Gilmore shot. Such is the popularity of this golf movie that even a person who doesn’t know which way round a golf club should be held will undoubtedly have heard of it.

A hilarious, no-brainer comedy featuring Adam Sandler which centres around a failed ice hockey player who finds he has a unique golf technique that allows him to hit a long ball.

Enjoyed this article? Then check out...

A Tiger Woods short film
The Miracle at Medinah DVD