Brooks Koepka made yet another solid start to a major championship with a round of 1-under-par at Royal St. George's. 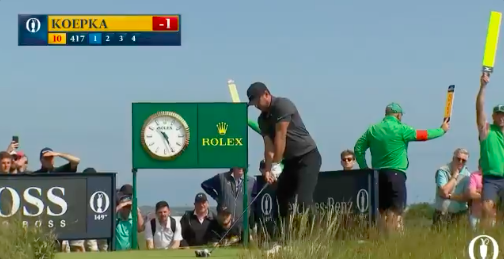 Brooks Koepka's record at major championships did not relent on Thursday with a solid round of 69 on the first day of The Open.

On a blustery morning in Sandwich, Koepka made a bogey on the par-4 2nd hole but he soon bounced back with a birdie at the par-4 5th hole.

Bryson DeChambeau and Rory McIlroy usually dominate the driving distance statistics on the PGA Tour, but it was Koepka who showed his muscle on the treacherous par-4 10th hole.

The four-time major champion used the breeze to his advantage on this 417-yard hole and hit his driver almost on to the green, leaving himself with a short pitch.

What a drive @bkoepka getting close to the front edge at the 417 yard 10th hole ⛳️ pic.twitter.com/a8SzOipdKA

The 31-year-old could only make par but he added a birdie on the par-5 14th hole to his one at the 9th hole to finish with a score of 1-under-par.

Koepka has a formidable record in major championships. Prior to the first round, the man from Florida was 84-under-par in major tournament rounds since 2016.

His score of 69 stands him in good stead heading into the second round, as it was a testing and windy day at Royal St. George's where there are mistakes to be made on every hole.

Koepka finished just four shots behind the early pacesetter Mackenzie Hughes, who was still out on the course and enjoying a low scoring day on 5-under-par.

The American's playing partners Jason Kokrak and Garrick Higgo also remain in the hunt for the Claret Jug, with respective scores of level-par and 3-over-par.

NEXT PAGE: "ONLY A MATTER OF TIME": DARREN CLARKE ON RORY MCILROY FINDING FORM AT THE OPEN