Jordan Spieth won the Open Championship in 2017 at Royal Birkdale and he began the 2021 tournament with a 65 on Thursday. 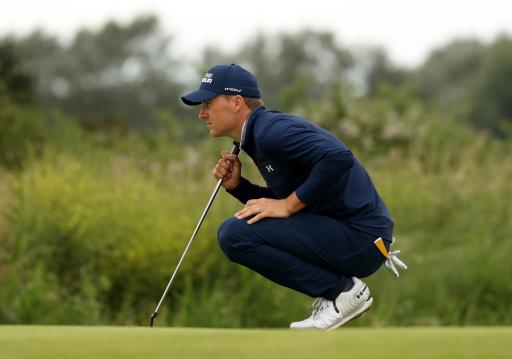 Jordan Spieth hit the top of the leaderboard on day one of the 2021 Open Championship, carding a round of 5-under-par at Royal St. George's.

Spieth has gone through a resurgence on the PGA Tour this year and he showed this on day one in Sandwich with a low round of 65.

After a bogey on the tough par-3 3rd hole, the Texan bounced back with four consecutive birdies from hole 5 to hole 8 to play the front nine in 3-under-par.

The 2017 Open champion then added further birdies at the 15th and 16th holes to finish with a score of 5-under-par to finish one shot behind clubhouse leader Louis Oosthuizen.

In contrast to Spieth, his playing partner Bryson DeChambeau couldn't find a rhythm in his first round as he carded a score of 1-over-par.

Despite hitting an iron off the 1st tee box, the 27-year-old made a bogey and although he got one shot back at the par-5 7th hole, he made more bogeys at the 8th and 9th holes.

The World No. 6 battled back with birdies at the 12th, 13th and 14th holes and it looked as though he could be coming to terms with the challenge of Royal St. George's.

But DeChambeau made bogeys on the 15th and 17th holes to finish on 1-over-par, leaving himself with plenty of work to do to climb back into contention on Friday.

2021 US Open champion Jon Rahm joined DeChambeau on 1-over-par after the Spaniard made a damaging double-bogey on the par-4 9th hole.

Rahm was 2-over-par after nine holes and then he made eight consecutive pars, followed by a birdie on the 18th hole to settle for a 71.

NEXT PAGE: "ONLY A MATTER OF TIME": DARREN CLARKE ON RORY MCILROY FINDING FORM AT THE OPEN