"Only a matter of time": Darren Clarke on Rory McIlroy finding form at The Open

Darren Clarke won the Open Championship the last time it was at Royal St. George's and he is backing Rory McIlroy to go well this week. 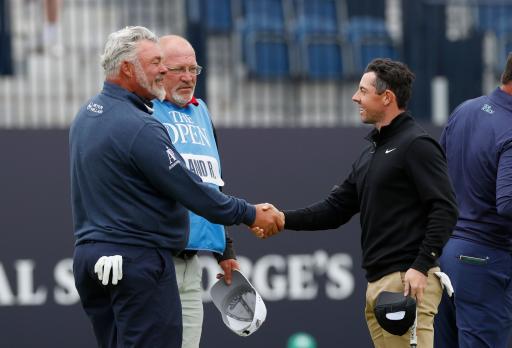 2011 Open champion Darren Clarke has backed Rory McIlroy to return to his best form at the Open Championship this week.

Clarke dug out a gritty and determined win on the links of Sandwich 10 years ago, but it is this aspect that McIlroy has lacked this season.

Although he picked up his third career win at the Wells Fargo Championship earlier in the season, the Northern Irishman has lacked consistency, but Clarke believes this could be his week.

"Rory is so gifted and talented that (it might be) just one little thing that clicks in his head and it works for him and he gets out there and he frees up and goes," Clarke said.

"He tried to do it at the US Open for a while. I think those were his words. Didn’t he say he was trying to free things up and go and play?

"If I was him, with his amount of talent, hell yeah I'd be frustrated with not winning tournaments. But with that being said, as I just said there, the flip-side of that is because of the talent that he does have, it's only a question of time before he starts winning."

RELATED: HAS RORY MCILROY REALLY "FIGURED SOMETHING OUT" AT THE OPEN CHAMPIONSHIP?

McIlroy missed the cut last week at the Scottish Open and finished for a disappointing tie for 59th place at the Irish Open the week before on the European Tour.

Earlier this week, McIlroy said that he may have "figured something out" in practice at Royal St. George's which could help him shoot better scores.

The four-time major winner will tee it up with Patrick Reed and Cameron Smith at 3.21 pm in his first round later today.