Phil Mickelson shot a poor score of 10-over-par at Royal St. George's in the first round of the Open Championship on Thursday. 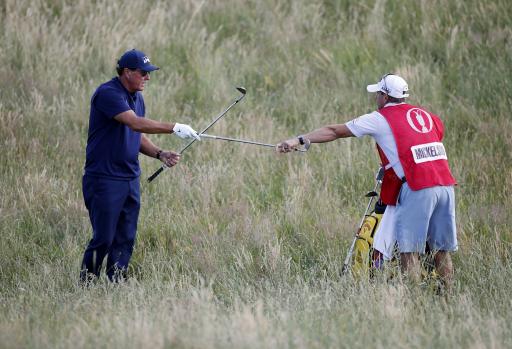 Phil Mickelson shot his worst ever opening round to a major tournament on Thursday at the Open Championship, carding a score of 10-over-par.

In May, Mickelson became the oldest golfer ever to win a major title at the PGA Championship, but he crashed back down to earth at Royal St. George's to finish dead last after round one.

After making par on the first two holes, he made three consecutive bogeys on the 3rd, 4th and 5th holes and he added two more at the par-5 7th hole and the par-4 9th hole.

He then made three bogeys on the back nine and compounded his day with a miserable double-bogey on his final hole to complete his score of 80.

The six-time major champion shares last place with the Australian Deyen Lawson and he will need a staggering round on Friday if he is to somehow make the cut.

Lefty is currently 16 shots behind Louis Oosthuizen, who was one of his closest opponents at Kiawah Island when he won his latest major title at the age of 50.

Louis Oosthuizen once again finds himself at the top of a major leaderboard on 6-under-par as he hunts for his second Claret Jug.

The 2010 Open champion made six birdies on a bogey-free card to finish with a 64, which is one shot ahead of Jordan Spieth and Brian Harman.

After a bogey on the tough par-3 3rd hole, Spieth bounced back with four consecutive birdies from hole 5 to hole 8 to play the front nine in 3-under-par.

The 2017 Open champion then added further birdies at the 15th and 16th holes to finish with a score of 5-under-par to finish one shot behind Oosthuizen.