Cobra rep on Bryson: "It's REALLY PAINFUL when he says something THAT STUPID!" 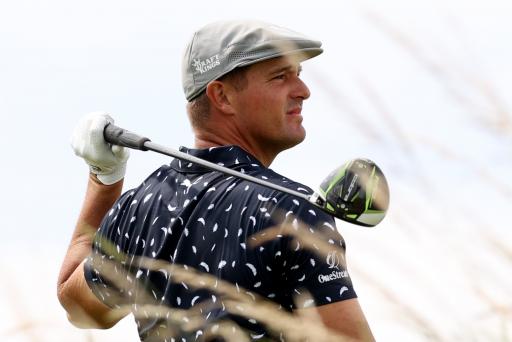 Cobra rep Ben Schomin, the man who caddied for Bryson DeChambeau at the Rocket Mortgage Classic two weeks ago, has hit back at the eight-time PGA Tour winner after hearing his "driver sucks" comment at The Open Championship on Thursday.

Schomin made his feelings be known to Golfweek, just minutes after DeChambeau had ranted about his Cobra Radspeed driver following a disappointing opening round of 1-over 71 at Royal St George's to lie seven shots off the pace.

DeChambeau voiced concern about his current driver choice after finding just four of 14 fairways on day one, telling the media during his post-round conference "the driver sucks."

"Everybody is bending over backwards," Schomin told Golfweek this afternoon.

"He has never really been happy, ever. Like, it’s very rare where he’s happy," continued Schomin, who acted as DeChambeau's stand-in caddie on the PGA Tour two weeks ago after DeChambeau decided to part ways with long-time caddie Tim Tucker.

"Now he’s in a place where he’s swinging a 5-degree driver with 200 mph of ball speed. Everybody is looking for a magic bullet. Well, the magic bullet becomes harder and harder to find the faster you swing and the lower your loft gets."

Schomin added: "He didn't really mean to say it that harshly. It's like an eight-year-old that gets mad at you. They might fly off the handle and say, 'I hate you'. But then you go. 'Whoa, no you don't'.

"We know as adults that they really don't mean that."

DeChambeau is using a custom Cobra Radspeed driver that has 5 degrees of loft and is 46 inches in length.