Bryson says he would have no problem being paired with Brooks at the Ryder Cup this September... 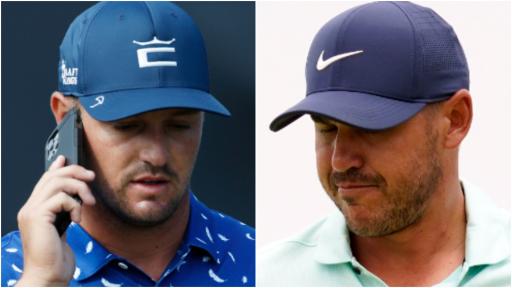 Bryson DeChambeau has welcomed the opportunity of being paired with Brooks Koepka at the Ryder Cup this September.

DeChambeau made his feelings known during his pre-Open Championship press conference at Royal St George's today, just a couple of hours after Brooks Koepka explained there was little chance of them being paired together by United States Ryder Cup captain Steve Stricker.

Bryson DeChambeau has said it would be "funny" to be partnered with Brooks Koepka at the Ryder Cup despite the pair's ongoing feud.

"No, no, no, not at all," responded DeChambeau when quizzed if he would have a problem being paired with Koepka in the foursomes or fourballs at Whistling Straits against Padraig Harrington's European side later this September.

"I think it would be kind of funny actually. I'd love it. I think we would do well to be honest. It would create quite an interesting vibe for the guys we are playing against."

As was the case during Koepka's press conference earlier in the day, DeChambeau was questioned about his compatriot following their recent war of words following the US PGA Championship.

Koepka had told the media as to the origin of their feud starting back in 2019 when he criticised DeChambeau for being a slow player, and that DeChambeau then failed to "hold the end of his bargain" when they had supposedly struck a deal at Liberty National to ease off on things.

DeChambeau claimed he had no idea what Koepka was even talking about.

"He can say whatever he wants," said DeChambeau.

"I think he said something about Liberty National and me not upholding something. I don't know what he's talking about in that regard. Maybe that's on me, maybe I didn't. I really don't remember anything about that.

"We just had a conversation, I really don't know what happened because we haven't really bantered back and forth until now, so why is that now happening now?

"Besides that, I'm here to just play golf and focus on that. If we want to keep bantering back and forth, obviously being respectful and keeping lines where they're not getting crossed... yeah, I think it's a good environment for people in golf."

NEXT PAGE: BROOKS EXPLAINS THE ORIGINS OF HIS FEUD WITH BRYSON