Ian Finnis believes that "The Scientist" needs to look over his numbers after he claimed he shouts "fore" 99% of the time. 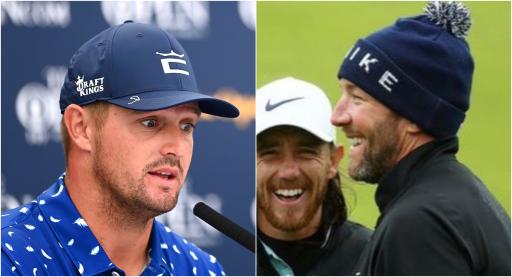 Speaking to the media yesterday, Bryson DeChambeau had to field a controversial question that accused him of never shouting 'fore' when hitting his ball towards a crowd.

The 2020 US Open champion claimed that he shouts '99% of the time' when he hits a wayward drive, but Tommy Fleetwood's caddie clearly begs to differ.

WATCH: BRYSON SAYS HIS "DRIVER SUCKS" AFTER POOR START AT THE OPEN

Ian Finnis, the big man from Merseyside, has had a long-standing relationship with Fleetwood and the pair have shared much success together.

After DeChambeau defended himself and said that it was unfortunate the topic had been brought up in the press conference at Royal St. George's, Finnis clearly felt that maybe the big-hitting American was not telling the whole truth.

For a scientist he not great with % #TheOpen #99% pic.twitter.com/cMaLJ9mawe

On the PGA Tour this season, we have seen the 27-year-old take aim on different lines off the tee box to other players, because of how far he is able to hit the ball.

Sometimes, this has led to him aiming his shots towards crowds of people in order to get a better line into the pin with his next shot. This is what Finnis may be referring to.

Nonetheless, golf fans enjoyed the tweet and left their comments:

"We're only on Tuesday and this has already won tweet of the week for me!!" one fan said.

RELATED: BRYSON DECHAMBEAU FIRES BACK AT GOLF JOURNALIST: "I DO SHOUT FORE!"

"I think his stats are wrong from what I have seen on tv in recent months. It’s not just him. It is the player's responsibility to shout fore. Nobody else," one fan commented.

"If you play golf and yell fore it might be in another player's backswing," another fan said.

"If not the player - why doesn’t their caddy do it?" another fan commented.

"Why do you think baseball put nets up. Too many people getting hit in the head with 100mph missiles," one fan said.