It's fair to say Brooks Koepka is NOT a fan of Royal St George's!

Brooks Koepka might not be a fan of Royal St George's but he certainly still fancies his chances of a first Claret Jug... 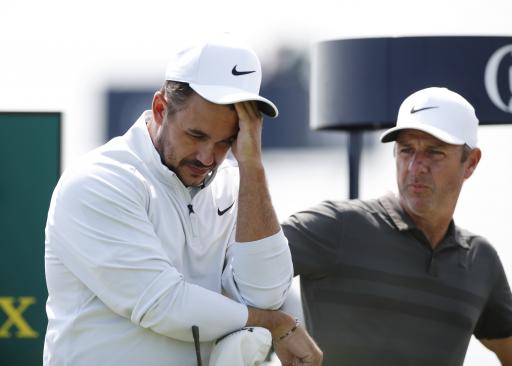 Brooks Koepka has revealed this week's Open Championship venue Royal St George's is most definitely not one of his favourite courses on the rota.

Saying that, he still fancies his chances of etching his name on the famous Claret Jug this week. After all, it is a major championship.

"It’s not my favorite venue that we’ve played," said Koepka, who has four majors to his name. "Quite a few blind tee shots, kind of hitting to nothing. Fairways are quite undulating. I don’t know, it’s not my favorite of the rotation, put it that way."

RELATED: BROOKS REVEALS WHAT WILL HAPPEN WITH HIM AND BRYSON AT THE RYDER CUP

Despite not being a huge fan of the place, Koepka told the media today how he attended the final day of the 2003 Open Championship at Royal St George's as a youngster with his family.

Then again, even back then he fell asleep.

"I ended up falling asleep right in the little pavilion to the right of 18 and didn’t even see the finish," said Koepka.

"I remember getting yelled at by my mom; I didn’t bring you over here to fall asleep kind of deal. But it was fun. We enjoyed the whole trip, and it was a cool family trip."

With a pair of US Open titles and a pair of US PGA victories to his name, Koepka is bidding to land his first Open Championship having picked up three top-10s in just six appearances.

Despite not quite hitting top form so far this season, Koepka arrives here off the back of a tie for second at the US PGA Championship and a tied fourth at the US Open. He likes his chances, no matter where he tees it up right now.

"It’s a major, so I’ll be up for it," said Koepka. "It’s a different feeling. It’s just more focused, more locked in on what I need to do, no distractions. I don’t know, I just simplify everything, and it becomes a lot easier.

"Maybe I always don’t have the best of prep coming into this. But I feel good. I feel my game feels solid. I like the way I’m hitting it right now, and I’m definitely more comfortable than I’ve been in years past coming over."