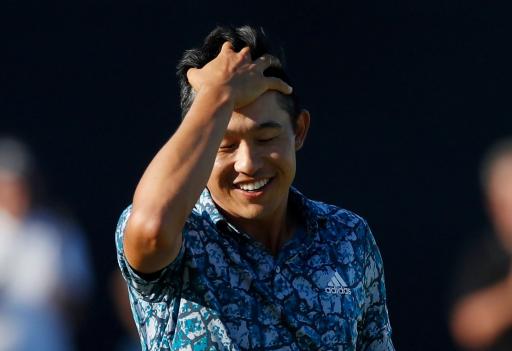 You may recall Collin Morikawa was forced to back off his final tee shot on the 18th hole en route to winning The Open two weeks ago. Only there was very good reason.

While most of us thought he backed off his drive down the 18th as a result of movement or mummerings in the gallery, it was in fact a result of prank "farting noises" via a microphone.

Morikawa revealed all on Barstool Sports’ Pardon My Take podcast last week. The interview with Morikawa comes in at 52 minutes in the YouTube video:

"Some spectator, at some point in the day, snuck a little old school microphone, like a recording," said Morikawa, who went on to win by two shots at Royal St George's.

"Threw it underneath one of the marshals around there and started playing these farting noises right as I was about to swing.

"I don't think people - and the announcers - understood what was going on. The marshal looked around the grass as it was really long, and then they found it.

Morikawa also spoke of his regret at calling the tournament 'The British Open' during his victory speech.

"I said the British Open in my speech, but it's The Open I guess," said Morikawa.

The two-time major champion also told golf fans need to "calm down" about carrying the Claret Jug - arguably the most famous trophy in golf - through security at the airport.

"Okay time out... I don't mind flying commercial, there is nothing wrong with that," said Morikawa, who was more than happy to carry his own trophy.

"I flew commercial from London to Atlanta, then took a private flight from Atlanta to Vegas, so everyone needs to calm down about this flying commercial. There is nothing wrong with it."

He added: "It fit perfectly in the overhead. No dings, no damages. It was great."

Morikawa will be competing in his first Olympic golf tournament in Tokyo this week and he starts as the warm 7/1 favourite following the withdrawal of World No.1 Jon Rahm, who tested positive for Covid-19 for the second time in six weeks.

NEXT PAGE: JON RAHM AND BRYSON DECHAMBEAU WITHDRAW FROM THE OLYMPICS DUE TO POSITIVE COVID TESTS