GolfMagic tees it up at the Home of Golf, the Old Course at St Andrews, ahead of the 150th Open Championship. 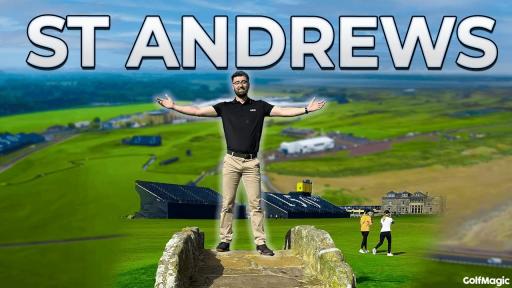 GolfMagic teed it up on the famous Old Course at St Andrews courtesy of BOSS just weeks prior to the 150th Open Championship.

BOSS invited a group 60 athletes, celebrities, influencers and journalists - of which GolfMagic's Alex Lodge was one of them - to play on the hallowed Scottish links that will soon be graced by the likes of Rory McIlroy, Tiger Woods and Dustin Johnson.

With the grandstands all up and ready for the world's best, how would GolfMagic fare?

WATCH OUR VIDEO TO FIND OUT

What happened at the BOSS VIP Golf Day?

The BOSS event began with breakfast at the famous Old Course Hotel, just a few feet from the 17th fairway.

We were then treated to a training experience with past Open champon Sandy Lyle, followed by a bite to eat at the exclusive members-only Forgan House.

How did GolfMagic get on at the Old Course?

In the afternoon, we then headed onto the Old Course at St Andrews, home of the 150th Open Championship.

Alex, representing GolfMagic and playing off an 8-handicap, enjoyed a round that he will remember for the rest of his life.

He made a steady par on the first despite feeling some nerves in front of the giant grandstands and all the people watching behind the tee box.

Alex then went birdie-birdie to move to 2-under par thru 3 holes!

He made the turn in 1-under par, and despite several bogeys on the back nine he still managed to go round in a very respectable 3-over par.

The day then culminated in a private dinner at the Rusacks Hotel followed by a prizegiving ceremony.

GolfMagic was invited on the trip to St Andrews to help BOSS celebrate the brand's longstanding relationship with the R&A and its sixth year as official clothing partner of The Open.

As part of BOSS' partnership with the United Nations Children's Fund UNICEF, the event raised money that will go towards helping vulnerable children around the world.

The brand has also introduced a new BOSS x The Open capsule to mark the event. Styles put an elevted spin on golf performance and feature a 150 motif in celebration of the championship's historic anniversary. The capsule is now available online and in selected stores.

For the 150th Open Championship itself, BOSS athletes Patrick Cantlay, Thomas Detry, Matthias Schwab and European Ryder Cup captain Henrik Stenson, who won the 145th Open at Royal Troon in 2016, will be dressed in the brand's Premium Golf Collection as they all view for the esteemed Claret Jug.