Has Rory McIlroy really "FIGURED SOMETHING OUT" at The Open Championship?

Rory McIlroy believes that during his practice rounds, he has found something which stands him in good stead for this week's Open Championship. 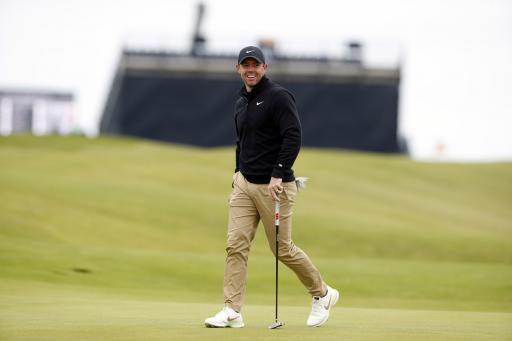 Rory McIlroy has not won a major tournament in seven years, but the Northern Irishman believes that he has found something in practice that could help him win the Open Championship.

Although McIlroy has made six top-10 finishes in 16 PGA Tour events, including a win at the Wells Fargo Championship, he has largely been inconsistent and has cut a frustrated figure on the golf course.

The 32-year-old has proven he can win on links courses, just as he did at Royal Liverpool in 2014, and it would be no shock if he played well at Royal St. George's this week.

"I feel good. I've hit the ball really good in practice over the last few days. I feel like I figured something out on Sunday here, which has been really good," said McIlroy.

"I hit the ball great on the range yesterday and I hit the ball well today on the course. You're thinking of your swing so much and it's really about trying to get that blend of getting your mechanics right, but then also letting your athletic ability and your instincts shine through as well.

"I'm just trying to get that balance and as I said, I feel like I figured something out on Sunday and I feel good with it and I feel good about where I am going into the week."

The 19-time PGA Tour winner has an extremely large fan base and he generates a lot of excitement when he is in contention at major tournaments.

It is no secret that McIlroy's weakness lies in completing four solid and low-scoring rounds. He often starts slow and leaves himself too much to do, just as he did at Royal Portrush in 2019 when he sadly missed the cut.

It is sometimes baffling to watch McIlroy struggle on big occasions because of how talented he is. In each of his four major wins, he looked formidable and there was an inevitability about each final round that he would get over the line.

I think he has lost this inevitability, but if he believes that he has figured something significant out in practice then we could all be in for a memorable week in Sandwich.

NEXT PAGE: BRYSON DECHAMBEAU FIRES BACK AT GOLF JOURNALIST: "I DO SHOUT FORE!"