Jon Rahm on Tiger Woods quote at St Andrews: "It's a bit of an exaggeration" 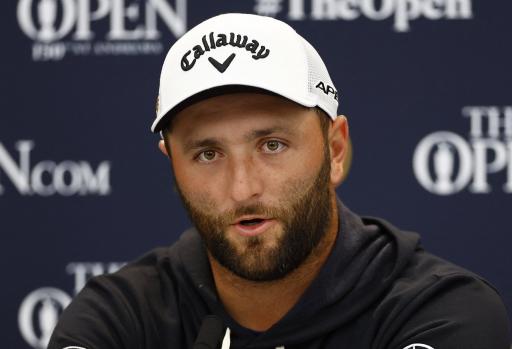 Tiger Woods and Jack Nicklaus both said you can't really call yourself a great player unless you win The Open Championship at St Andrews. Jon Rahm gets what they are saying but thinks it's something of an exaggeration.

Both Woods and Nicklaus have won The Open three times, each winning twice on the famous Old Course at St Andrews.

Rahm, who has slipped from first to third in the world rankings in recent months, is seeking to win his second career major title to go alongside his US Open in 2021.

To be part of the record books in The Open's 150th anniversary at the Home of Golf would mean everything to Rahm.

"History. It's as simple as that," replied Rahm when quizzed on what makes St Andrews the pinnacle of golf.

"History. I wouldn't say there's anything with the golf course itself, which is plenty special.

"I mean, I don't think there's many other courses where there's only five individual greens and all the shared fairways and all these blind spots and all these many different ways of playing it. It's just the history of the game and how much it means.

"I know The Open first started in Prestwick, but The R&A Club has been here, being part of the Scottish heritage that it is right now. The area on the 18th green, 1st tee, it's as unique as it gets.

"I've heard multiple champions say it. I think it was Jack and Tiger both accomplished it. You can't really call yourself a great player unless you win The Open at St Andrews, which is a very selective group to say. I think it's a bit of an exaggeration, but I do know what they mean.

"And it can almost put your career to another level just because how great of a venue this one is. Mainly history. That's what I would say."

Rahm enters the 150th Open Championship in some indifferent form with a victory at the Mexico Open in early May but no top-10 finishes in four tournament appearances since.

Next Page: Rory McIlroy believes the R&A were right to not invite Greg Norman