Rory McIlroy says it was "the right decision" that Greg Norman wasn't involved in the celebrations at the 150th Open Championship. 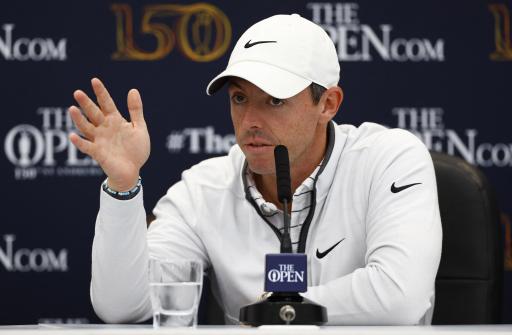 Rory McIlroy says it was “the right decision” to disinvite LIV Golf’s Greg Norman from the celebrations at the 150th Open Championship ahead of the landmark major.

The Northern Irishman, 33, faced the media this morning in St Andrews where he admitted that he hopes this week will bring him his first major since the 2014 PGA Championship at Valhalla, but he's not going into the week "thinking it's my time".

McIlroy spoke on several topics including his form, his relationship with Tiger Woods and of course the enduring saga around LIV Golf as it battles it out with the PGA Tour and DP World Tour.

The four-time major winner has become a de-factor speaker on the topic. He is a fierce defender of the PGA Tour and has even accused some players of “duplicitous” behaviour.

He took a dig at LIV Golf chief executive Greg Norman at the RBC Canadian Open when he claimed his 21st PGA Tour victory – one more than the Great White Shark ever managed in his career.

Norman, 72, was disinvited from the 150th Open celebrations this week by the R&A. The governing body claimed they did not want the LIV Golf situation to detract from the week.

The two-time Claret Jug winner said he was disappointed with the decision, describing it as “petty” and added that he though the R&A would rise above all the drama.

Even legendary golfer Jack Nicklaus admitted yesterday he counts Norman as a friend but “doesn’t see eye-to-eye” with the controversial figure.

McIlroy was asked if he was “relieved” Norman is not involved this week.

He replied: “It’s the 150th Open Championship, and that’s what we need to focus on. I think the focus would have been taken away a little bit if he’d have been here.

“I supported that decision, and I think right now, because of everything that’s happening in the golf world, I think it was the right decision to be made.

“But if things change in the future, or whatever happens, who knows, but I could see a day where he’s certainly welcome back.

“But right now, with everything going on, we want the focus to be on the 150th Open Championship and this being a celebration of a wonderful golf tournament and a wonderful game in general, and I think it was the right decision for that.”

Speaking of Woods’ chances this week, McIlroy, of course, said he would not be surprised to see the big cat in contention.

“I think the way the golf course is, and the way conditions are, I could certainly see it. It’s not going to be – it’s going to be a game of chess this week, and no one’s been better at playing that sort of chess game on a golf course than Tiger over the last 20 years.”

Speaking of his own chances, McIlroy said: “I’ve played one Open here before. I got off to a great start and got caught out in wind not too dissimilar to what’s out there today.”

He added: “Yeah, I’m playing well. I’m in good form. My confidence in my game is high as it’s been in quite a while.

“I can’t go in here thinking that this might be my time. I just have to go out and play a really good tournament. I’ve got to string four good rounds together, and hopefully at the end of the week, that’s good enough to win.

“I’m happy where everything’s at, and I just can’t get ahead of myself, and just have to make sure that I prepare well the next couple of days and get myself in the right frame of mind for Thursday.”